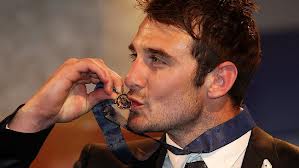 Son of a Gun

It’s 2008, Hawthorn have just ambushed the legendary Geelong team to win the A.F.L. Premiership. The Hawks with a young team and a young coach were packing the talent and a game plan that left Geelong and the competition for dead. That same year over at Essendon, the young prodigy named Jobe Watson, the son of a football legend, was having a year to forget. Regularly challenged by the coach about his commitment, desire and ultimately his toughness.

For Hawthorn the future looked bright as the then president Jeff Kennett claimed “that Geelong no longer has the mental character to beat Hawthorn!” Since that year… Hawthorn has never again beaten Geelong and the team that was destined for immediate greatness plunged well down the ladder as the game became dominated by the defensive styles of Collingwood, St. Kilda and Geelong. While for Jobe Watson a phone call from Dad painted a truthful picture “you don’t have play football if you don’t want to, but at the moment you’re not doing much.”

Hawthorn down, coach Alistair Clarkson went back to the drawing board. He wanted a game plan to could trump Collingwood’s fabled soccer style ‘press’ and needed a list of players with the commitment, patience and skill to pull it off. Jobe Watson hired help. He called one of the game’s greatest in Greg Williams (2 x Brownlow Medal, Premiership Player, Norm Smith Medal) and great boxing trainer Ray Giles (coached Jeff Fenech, Paul Miller, Lovemore N’Dou). He worked tirelessly in the gym and on the training track, alone he fought his way back into the light.

For 3 years both Hawthorn and Jobe Watson stuck at it. Fighting the good fight, relentless to the task that they believed would make them great. They didn’t get results easily. The Hawthorn game plan was criticised, labelled ‘too cute,’ ‘behind the times,’ and ‘unattainable.’ While Watson regained the trust of his coach, then his team who elevated him to captain. Hawthorn stuck to their guns with absolute belief in each other, the coach and their style of play.

This Monday Jobe Watson received the game’s highest individual prize, the Brownlow Medal and on Saturday Hawthorn will start favourites to win the Gand Final, with a game plan that is currently unmatched. After the Brownlow Medal win Watson, about his career would say “anyone can look good when things are going well, but when it gets hard do you have the desire to hang tough and keep trying to improve?”