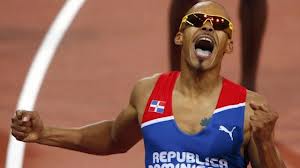 Watching the Olympics this morning I was very emotional. The legendary Felix Sanchez of the Dominican Republic lit up the track in the 400 metres hurdles to claim his second Olympic gold in that event.

Why I love Felix Sanchez: In Sydney 2000 he was the fancied runner after posting great times during the 1999 season on for college track team USC and holding that form into the European season of 2000. In Sydney Sanchez failed to make the final. For motivation he vowed to wear the flashing bracelet that the athletes were given for the 2000 opening ceremony in every race until he won the Gold in the next Olympics, Athens 2004.

From that untimely defeat in the semi-finals at Sydney 2000 until the final in Athens 2004 Sanchez went on a 43 race winning streak which included 2 World Titles and ultimately fulfilled his vow of winning the Olympic Gold.

Sanchez lines up as an outsider in the Olympic Final in London 2012. Eight years on from the Athens triumph. A medal chance at best they said and not in great form. Sanchez this time wearing a photo of his deceased grand mother pinned to the inside of his bib started strongly and was never headed. His outpour of emotion of the dais was a something to behold and his post-race interviews were humbling. No chewy chat about injuries, temperature, wind inside the stadium, what I did in training or youthful promises about what might happen in Rio de Janeiro just a veteran who did his job and was proud of the achievement.

Why do I love it? Whatever you need to run fast – flashing bracelet, photo, favourite jocks, odd socks… takes the tools you need and get the job done.