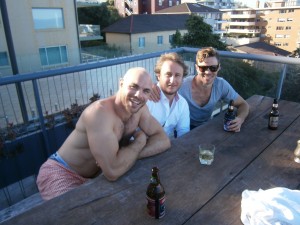 One day my bike got a flat tyre and I bought a socket set to change the wheel. Now at the time I was a real Aussie battler so at the hardware store I obviously chose the cheapest thing available to ‘fix’ my problem. Proud as punch I walked home puffing my chest out like a peacock in mating season.

When I went to work on my bicycle, the cheap tools that I thought were my saving grace and turned out to be my worst nightmare. The socket set broke straight-up and also stripped the nut on my wheel which would also need replacing. I had gone from a man with a simple flat tyre – to a man who had been to the hardware store and back, on foot mind you, had wasted money on dodgy tools, who now had wheel problems because of it, and add to this indignity I still had the original flat tyre.

All that effort for no gain. “Sean, you are a goose” I thought.

It was a this moment that my good friend, Simon O’Brien had come to train with me and I ran him though the day’s ordeal. To which he replied – “Poor man pays twice.” Now anyone who knows Simon knows that he knows better than to mess around with cheap half-baked equipment, this is a man I should listen to. The reason I was S.O.L. (Shit out of luck) was because I tried to take a short cut, the easy option. My weakness had escalated my problem.

So I hung onto these wise words that I heard that day and I think that most people will be able to relate to a time when they tried to take the easy road only to be eventually ‘found wanting’ later and have to walk the seemingly endless path of degradation. And deservedly so.

Many people start a fitness regime or make bold, often drunken, promises about what they are ‘gonna’ do in the future. How many mountains they are going to climb this year or by whenever. But often they don’t do what they said they were ‘gonna’ do because they ultimately realise that it takes a lot of work and it requires things to be done that they don’t necessarily want to do. They aren’t willing to ‘pay the price.’ Just like I wasn’t willing to pay the price for a quality socket set that day.

People who don’t respect the value of hard training and quality, time absorbing preparation  are like I was that day when showed no respect for ‘quality’ trade tools. Many a person has attempted to increase their fitness in exactly the same fashion to me that day – a cheap shot at trying to get to where you’d like to be. Only to find later that the cheap shot was useless  and a waste of time, money and effort. Subsequently the whole process needs to be done again because the original attempt was about as fruitful as my last my last tax return.

I frustratedly marched back to the hardware store that day, like a derelict with a bad back back, to buy the socket that I should have bought originally. But I knew that there was only one person to blame and my very wise friend Simon had, in one sentence, taught me a life lesson that I’ll remember and recall for the rest of my days. Don’t be like me, marching back to the store with a bad attitude and hating yourself. Do it right, one time.