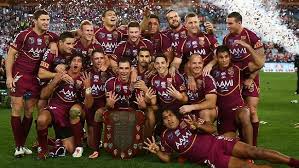 Shut The Gate: Queensland Celebrate No. 8

In fitness training this trend is common place. We all have motivation to get to somewhere. You see the guy who ‘trains-the-house-down’ in the boxing gym who gets reasonably fit and suddenly thinks he’s the next Salvador Sanchez, or the bride who has just dropped 10kg’s to look good at her wedding, and the football player who couldn’t get a kick in a stampede last season who decided this year to implement some pre-season running training and he’s become the next Wayne Carey.

Admire their enthusiasm to attain success but can it be sustained?

In 1975, Arnold Schwarzenegger was 5 times Mr. Olympia (Professional Body Building World Title) and aiming for his 6th consecutive title. While sun baking and applying the mandatory olive oil, a competitor challenged him by saying “The wolf at the top of the mountain isn’t as hungry as the wolf climbing the mountain.”

Schwarzenegger quipped, “But when he wants the food, it’s there.”

Every person has their own goals in health and fitness. There’s a mountain to climb and meal to eat just like the hungry wolf. When you get up there and look around will you be hungry enough to keep feasting and keep the hungrier wolves at bay, Kevin Costner style.

Arnold was confident, no doubt. Self believing, unquestionably. Arrogant, perhaps yes. However, is Arnold saying his 6th title would come on a silver platter or that he didn’t have to worry about the challenges from the improving competitors? Or is he saying, he knows what to do, how to do it and when to execute what he does? There’s no mystery to winning a championship once you’ve done it. Arnold had done it 5 times already and still he sat at the top of the mountain. He’s doing something right.

Everyone saw Queensland scoop it’s 8th successive State of Origin crown last week. In the throes of celebration of this amazing achievement was overshadowed by detractors in the media who condemned Queensland’s ‘so-called’ arrogance, bullying and underhanded tactics.

Does this guarantee their success? No. Not even close. Sure it’s part of the entire package and helps them stave off challenges when their back’s are to the wall. Coach Mal Meninga pointed this out after the win. If they thought the hard work was already done, how have they been able to remain champions for 8 years?

Like Arnold, Queensland have been winning for years. They know how to win, they know the cost of victory and they know when to turn it on. It gets harder every year, more expensive, more taxing as the opposition improve. Is it as simple as wash rinse repeat?

What the skeptics don’t report is the fierce internal pressure that occurs perpetually to maintain that winning Queensland standard. It’s more than just throwing on the jersey, running onto the field and ‘bullying’ some NSW boys. Similarly, Arnold knew that for him to still be Arnold he had to maintain his standard of perfection in building his body, in his words, “Like a sculptor.” He says, “The sculptor cannot just slap some mud on the shoulders because it looks all out of proportion. He must build the entire body, shoulders included.” There’s no short cuts. None.

So you’re on top and killing it, what internal standards are you setting to keep yourself up there? Ask yourself, what would Arnold do? What would Queensland do?

Do you brush social commitments to go to bed early and rise before dawn like a rice farmer? Do you increase training sessions from 1 hour to 1:15? Do you do 3 sessions on the foam roller in stead of 2? Do you train on friday nights and sunday mornings when the gym is desolate?

Arnold and Queensland, both need to eat as often as their rivals. The difference is they know the cost of eating when their rivals do not. They know what they must give up to eat. Hours in the gym, hard hit-ups, ignoring detractors who say they can’t possibly win again, but they always do.

No wolf deserves a feed unless they are willing to fight for it. No person deserves fitness, health and lifestyle unless they fight to get it and fight to keep it.