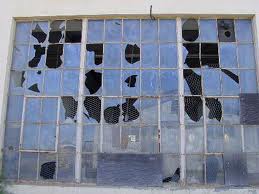 Broken Windows: Where It Starts

The cold weather is coming. Many mornings this week I’ve heard the old chestnut sayings: “How cold is it maaate” and “Maaate it was tough getting out of bed this morning.” Sure the weather has started to turn and the mornings are a bit cooler than before but what it’s we do with this stimulus that counts.

I want to get inside the heads of people who struggle to get going when the going gets tough (or cold). I always look at the cold weather as being a positive thing:

The ‘Broken Windows Theory’ was introduced in 1982 by social scientists James Q. Wilson and George L. Keiling. It states:

A building with a one broken window that isn’t repaired was likely result in every window being smashed soon after. Following this, the place will be inundated by squatters and gypsies, before ultimately becoming a haven for unlicensed boxing matches and/or dog fighting.

Ok those were my own words but you get the gist of it.

The morale of the story is, if you let a habit develop it only gets worse before it eventually turns to chaos. I can remember back at high school the same kids would always be pulling out of races or pretending to be injured when training got tough. Even at that young age I thought, the hardest race to pull out of is the first one you pull out of. Meaning that, once you did it once, after that it threatened to become habit.

The words of Jordan Belfort, the infamous ‘Wolf of Wall Street,’ also support this theory. He stated that once you can justify the wrong actions you will keep practicing these because you’ve lost perspective of what is right. This guy is a ‘big-noter’ but on this I like his train of thought.

So when your alarm goes off in the morning and it feels like you’ve been asleep for 3 minutes and it’s cold, and maybe wet outside, think of the Broken Window Theory. Set some rules for yourself:

A few simple rules is all you need and bloody stick to them! In the words of Keith Richards “Without rules you’d ‘ave frigging anarchy.” Think of the positive mood at the end of training when you get home from the workout and sit down and feel proud that you’ve already been out going hard like a legend.

Start a good trend, not a bad one.