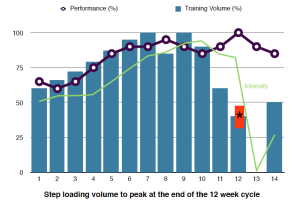 Peaking: Get to your best when it counts.

It’s common for people to start training to get in shape for a particular occasion or event. Often I hear the cries of, “I’ve got to be fit for…whatever).” It’s the same for all levels of sport, so far as I’ve noticed, the big day is when an athlete wants to be at their best and ready to fire.

Whatever your big day is, we all agree, we want to be going well when it really matters. Then the argument becomes, how we best get there?

When I train people, myself included, I like to keep in mind that indeed we are people. Different schedules and strategies work for different athletes and we should employ an approach that will challenge the athlete without breaking them in two mentally, physically or both.

So what do you like? What works for you? And what won’t kill you?

I remember reading an article from 1983 that spoke about Robert De Castella’s training regime during the peak of his illustrious career. ‘Deek’ mentioned how his training program generally follows the same pattern week-in, week-out for the entire year and had done so for many years. That’s how he worked, high milage, training twice a day every day, no days off.

His idea of consistently maintaining a grounding of solid running volume, he believed set him up to adjust easily for competitions. All his work was in the bank, from there he just had to sharpen up and get ready to race. It’s a good idea. This idea boasts both physical and mental prowess, I’ll explain. Physical, because his body is used to large training loads and won’t have to adapt to the shock of a sharp increase in volume. Mental, because he knows he can always train, any day of the year he’s on. It becomes routine to overcome the self-doubt and slackness that dogs all athletes.

I love Deek’s attitude but I think he’s a rare beast, the guy’s a freak really, just peruse his record. The place where I tend to reside in terms of training cycle, is different to the great man, I use more of an on/off seasonal approach. Build up, race, disappear for a while, come back. That’s how I operate best and it’s good for people who like variety in their program.

I find it hard to be really fit and enthusiastic about training and racing all the time. I work better when I make up my mind at a point and then put the head down for a while and see how it goes. I also get bored on the same time consuming workouts that were the same this week, as last week and the ten before. I can’t hack it. Some can, I can’t.

My method also requires both physical and mental aptitude in fitness and preparation, I’ll disclose. Physically, the body has appropriate time to rest and relax on lower training loads, like a racehorse that goes back to the paddock for a spell. Mentally, two reasons, 1) you’re not applying mental pressure to perform at optimum level all the time, and 2) you learn the value of patience during a comeback. Knowing you’re body is building, respecting that, and giving it time to prosper is a positive virtue of the seasoned campaigner or warrior, if you will. Nothing surer than race day arriving and when it does, he’ll be there.

People say it’s dangerous to have a fitness lapse during the year, maybe even gain some weight and take a few Sunday’s sleeping in but unless you’ve got a vanity problem, who cares? If you can’t maintain rigid discipline all year, don’t do your head in trying. Revert to a slower, less voluminous cycle and pedal that out until you get some fire back in the belly. I call it dangerous to (in the words of Sebastian Coe), “Run mile after bleeding mile and not really knowing why you’re doing it.”

Coe like De Castella, are both legends that employed different styles of training based on what they believed in and, most importantly what worked for them. In both cases, I’d say these men were able to perform at crucial points in their career, they just took a different route to get there.

If we know ourselves well enough, we should know what works for our body in training. To stay up and have a consistent year, or to get something quality done then disappear for a while and come back later, like Elvis or Santa?

Let your mind and body talk to you. What is it saying?