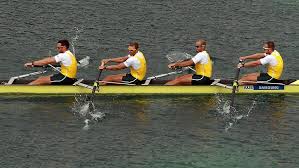 An interesting phenomenon in sports and training comes at the end of an effort when we increase the tempo for the big finish. We all like to finish off on a high note and come home like Gun Synd (1972 Horse of the Year, noted for guts and a big finish).

This so-called big finish be a trap for many athletes. The increase in effort can result in a decrease in efficiency, resulting in a net loss. When the heat is on late in the stanza and the whip are cracking, while we have to ‘up the ante’ it’s important to stay calm and relaxed and going at optimal speed.

The best sports to demonstrate this are water sports. Because you need to be smooth and more turn over can be costly.

The very beautiful sports of rowing and swimming are a case in point. We know that taking more strokes doesn’t mean you go faster, it’s important to maximise to power of the stroke by letting the boat or body glide through the water as far as possible before disturbing the pattern for the next stroke. So when you see those cats on the ergometer going like a sewing machine, just know that it doesn’t work like that in real life believe me.

The London Olympic Games of 2012, final of the four oared boat pitted two evenly matched crews, in Australia and Great Britain, who raced hard to the wire. Though, it’s true that in the latter stages of this race, both Australia and Great Britain’s boat speed actually slowed when they increased the rating in search of the ‘big finish.’ Unfortunately for us Aussies, the ‘bubble and squeak’ were just too good.

Whether your in front or behind, staying relaxed and in control is the key to optimising your performance. People of my vintage will remember the classic Duncan Armstrong race from the Seoul Olympics in 1988 where he came from behind to beat three world record holders in the 200 metres freestyle.

Both Duncan and our rowers increase the tempo at the finish and have different results. One wins, one loses. The point is, Duncan was racing to his exact game plan (it was a PB and WR) where the rowers were trying to ‘outdo’ themselves and in retrospect went backwards. He stayed smooth in the water and got maximum benefit for his output. He gets the last laugh, the rowers don’t.

Being smooth and in control under pressure is what it’s all about if you want to perform well. Even on a lower level, doing what you know you can do is better than trying to be Hercules and finishing like Steve Urkel. How many times have I put boys in the boxing ring and said, just throw your jab for me, only to see them display the very unsightly ‘palm tree in a cyclone’ boxing technique and get their heads punched in.

So don’t let me. Stick to the plan, stay smooth, do what you know you can. Don’t worry about tensing up and making ‘gorilla faces,’ the smiling assassin always wins.