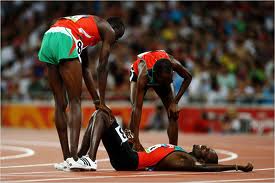 February is here and the grind of 2013 is starting to take hold. Athletes remembering what it’s like to wake up with sore muscles and have to go train again anyway. Volume is starting to ramp up and intensity is climbing. There’s a saying in the A.F.L. about young players getting “second year blues,” after a ‘boom’ first season, often their progress can be halted in year two. For any number of reasons, the opposition is aware of who they are now, the exuberance that comes with a new job (playing senior footy) has now diminished, or the work load of professional footy is getting tough.

Training various people for any number of fitness goals, I often encounter a similar phenomenon known as “second month blues,” and it’s right about now when the start to emerge. After a bonza first month of training, the new shoes are now a bit dirty and the ‘hi-viz’ singlet is has started to fade into a depressing yellow like an old newspaper. The novelty of the fitness binge has worn off and guess what? There’s still work to be done! Your goal event is in July, there’s still five months to go, Champ.

I’ve stated previously that you should have your ‘fitness year’ mapped out, with training of high/low intensity and volume, rest, cross training, lead-up events, time trials, etc. Whatever you think it will take to get you to your goal this year.

The problem is that most people try to get there too fast. They go nuts for one month and then have burnt themselves out or done an injury. My Dad always said to me that: “it’s better to go in under-done than over-done.” Sure he was talking about competition but the same is true for training. To approach this time of year with ‘work to do’ is brilliant, especially if you’re competition is a few months away. Conversely, to be at this point of the year and be ‘over it’ would be a disaster.

My good friend, is training for the London Marathon in April and with the addition of a baby to the family has been struggling to find the time to get the work in for the big event. I told him to stay calm and work on the things we talked about, there’s still time to get some quality work in. He told me he “had work to do” but it was good that he’s was still keen on the dream and hadn’t over-done himself in training and ‘burnt out’ two months before the race.

As I said last week, “it’s never perfect” and just as important as it is to train hard you need to be able to relax and put faith in yourself, your coach and the work. Don’t ‘over think’ it, just relax and let nature take its course.