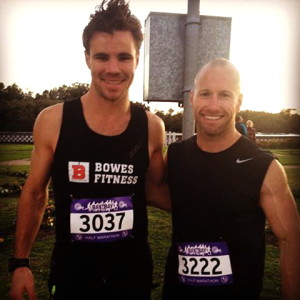 Last weekend I journeyed to an amateur boxing tournament for the first time in over two years. I watched my friend and training partner Trent Langlands go toe-to-toe with a warrior from across town. The action was fierce and frenetic.

In sports like boxing so much focus is placed on the result. Whether we win or lose usually dictates our mood about the contest and significant points that had an impact on the result.

This scenario often depicts peoples attitudes to health and fitness. They set a goals like: lose 10kg, complete a marathon or play for 10 minutes with the kids without busting a ‘fufu’ valve. That’s their aim and the result is determined by whether they get there. You succeed or fail by what you’re measured against. Instead of an opposition fighter you have the scales, race or the kids.

In boxing, there’s very little room for error, failure or losing narrowly but still having a good time. It’s not like a ‘fun run’ where everyone does their best, finishes somewhere in the pack and goes home happy, and throwing out ‘high fives’ like the Harlem Globetrotters.

Boxing is ruthless. It’s black and white. You win or lose. Winning on the day is all that matters, or is it?

Trent fought his heart out on Saturday night but was it good enough to win? No.

Does it matter whether he won or lost? No. Would I have preferred him to win? It doesn’t matter to me.

Did I want him to be his best on the night? Yes.

I place the same level of importance on people’s health and fitness goals. I want everyone to try their hardest but I don’t care if you can only lose 4kg instead of 5. If that’s all you’ve got in you, that’s fine. Come out with your head held high.

The quest for fitness is like the fight I watched that night. Give it everything you’ve got and don’t worry about the result.

Post fight I told Trent, the result doesn’t matter. So you lost, big deal. How do you think you performed? Did you execute things that you practiced in training? Did you avoid temptations to brawl? Did you stay focused for the entire fight?

“Once you try to beat someone you’re already beaten.”

These words rang in my ear while I watched the fight unfold. Trent could have fought a monkey that couldn’t punch out of a wet paper bag and got a dazzling win, but he’d still be the same fighter.

Would we look closely at the areas lacking in his game plan then? No. Definitely not. Net result – loss.

The loss, while it’s not important anyway, allows us to reassess areas that need improvement to fulfill Trent’s potential as the complete athlete. So the next time he dances under the lights he’s running at 100% capacity.

In any health of fitness quest, it’s best to focus on yourself and your goals, don’t compare yourself to other people. They are on their path and you are on yours. If you focus on other muppets too much you become the muppet. Mark my words.