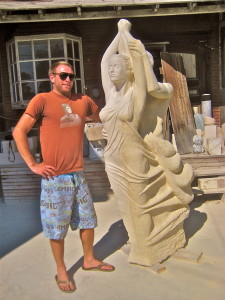 Man of many talents carves rock for a crust.

The weekend was huge.

Bowes Fitness’ favourite antipodean, Blake Rankin, competed in the Los Angeles Marathon, on Sunday 17 March (St. Patrick’s Day). This was a certified qualification race for the Boston Marathon in 2014. Boston is the world’s oldest and most revered marathon event. A race where the brave deeds of legends such as, Rob De Castella (Aus), Louise Savauge (Aus), Bill Rogers (U.S.A.), Rosa Mota (Por), Geoffrey Mutai (Ken) record, and Margaret Okayo (Ken) record have become epic running tales. Legends and fables that are relived by runners’ the world over while standing in the queue for the toilets at a race, sitting around the camp fire in their ‘splitties’ (running shorts), or even darting into the bushes in the middle of a ‘long run.’

Many nights I have mooted the famed 1986 race that still stands as the Australian marathon record, run by the great Robert De Castella in a time of 2:07:51. Allegedly, he still carries these numbers on his car’s personalised number plates.

The age qualifying time for Boston 2014 is 3:05:00. Qualifying for this race is no easy feat. Many ‘so-called’ warriors have gone into the marathon ‘all guns blazing’ based on a fast enough half-marathon time only to learn that the marathon is much tougher beast. A test that exhausts muscles glycogen stores and not only tests athletes’ physical preparation and mental toughness, but the ability to sit back and be patient, to time the race perfectly.

The qualifying window for Boston 2014 opened in September last year. To date, Blake made his first attempt at besting 3:05 in the Las Vegas Marathon, in November. His race started out ok but ultimately fell off the rails in the latter stages and was his time was not fast enough.

Mentally beaten and physically spent but still determined to make to ‘toe the line’ in Boston, Blake swore to make it back onto the road asap and achieve the goal. Originally mooting a shot at the Carlsbad Marathon in January. But was this the smartest move?

During a late night/early morning phone call abroad (after Stereosonic, everyone else was in bed. Stezza yeow!) just weeks after the Las Vegas attempt, Blake and I decided it was best to practice what we preach, take it easy and recover properly from the Las Vegas race. The rule of road racing is to take training light for as many days as miles you have just raced. A marathon is 26 miles, take 26 days of rest and light training, don’t blow your ‘fufu’ valve when it’s not even healed from hoofing it around town for 26 miles.

We sat back and studied the road running guide of the U.S.A. We needed a race the was at the right time of year so temperatures were cool, we need it to be far enough away to give us time to recover from Las Vegas and prepare and taper for the new event. We wanted it close to home, nothing beats California and most of all, I had to make blake believe that this was our best chance. All the factors will be right, let’s go for it.

I set a rigorous training program that asked for ultimate dedication and belief. The runs were hard and tough. The program asked for commitment to the little things, core strength training, leg speed drills and glute muscle training (makes you better looking also). We set a target goal to go under the magical 3 hour mark, leaving 5 minutes to spare under the Boston qualifying standard. This would ensure the training forced us to go further, harder and longer. To leave no stone unturned. To make the second, third, fourth efforts in training. Every 1% would count if we were to achieve the dream.

So when St. Patrick’s Day rolled around we knew the work had been done and it was just a matter of putting it out there. To run across Los Angeles and ‘empty the tank. At home, I was glued to the live results board from Los Angeles and constantly checking timezone websites to see if the race would be finished yet. I sat on the edge of my seat waiting for some news.

Then the result came though…

It hadn’t broken 3 hours. But I sat back a smiled punched the air and shouted triumphantly:

N.B. The quote “That’ll do. THAT WILL DO!” quote comes from the 1997 A.F.L. Grand Final when Adelaide Crows hero Darren Jarman kicked his last goal in a 5 goal final quarter romp to sink the Saints. Listen closely for the excitable Bruce McAvaney’s commentary, it’s inspirational. See below: