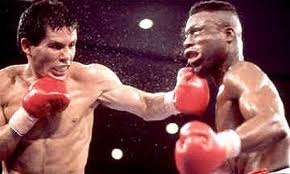 St. Patrick’s Day, 1990 (that’s March 17, if you’re not a Catholic). One of the greatest fighters in history and a young challenger to his throne. This was the biggest little-man’s fight money could buy. Two undefeated champions on a collision course in the Junior Welterweight Division (140 pounds or 63.5kg). Classy American boxer Meldrick ‘T.N.T.’ Taylor vs. Mexican Aztec Warrior Julio Caesar Chavez, polar opposites in style these men seemed to be perfect foils for one another.

Touted as ‘Thunder vs. Lightning’ this fight would eventuate as ‘1990 Fight of the Year’ and some critics called it the best fight of the decade for it’s high drama, non-stop action and inevitable controversy. For the two warriors inside the square ring, this bout would change the course of their boxing careers and lives.

This challenge of risk and reward reminds me of what we all embark on at the beginning of a fitness campaign. Whether you’re ‘Thunder’ or ‘Lightning,’ usually the goal is the get away from where you are now and illuminate a distant dream. Sugar Ray Leonard once said “Sure there’s two champions, but there’s only one world.” This signifies that to achieve some thing worth while, you have to fight. You want to be better than you are now? Prove it. Take the biggest challenge available and may the best man win.

The same way that these two undefeated champions laid everything on the line in a ‘winner take all’ manner should be applauded. Anybody can learn a lot from this about having the will to prove you can achieve. Regardless of what your goal is it should be hard enough so that when you get there it will be really special. In many ways you need to possess the audacity, arrogance and will to set the bar high and chase after it relentlessly.

Adam Franklin is someone I consider a seasoned marathoner having completed the 26 mile course on four big occasions. Still lingering is Adam’s desire to break the 3:30 barrier for the iconic distance, having lowered his time to a very slick 3:34. 3:29 is a goal that he has set for this year. David croft, competes in the Paris Marathon in two week’s time with the same goal of trying to break 3:30. His last attempt was a soul destroying 4:12. This time his preparation has been comprehensive and complete. My own goal to break 15:00 for 5km is still just out of reach. In 3 attempts, I have gone 10 seconds closer each time and predict that on my next attempt I will do it. The same way that Taylor and Chavez had found their perfect match in the ring, we have found our perfect challenge on the hoof. Our fight can be won but we must fight.

Julio Caesar Chavez, undefeated from 66 bouts, was not only regarded as the best pound-for-pound boxer in the sport but also the toughest. He embodied the Mexican mantra – outlast, outwork, outfight, out battle.

Meldrick Taylor was a rising superstar, Olympic gold medallist and undefeated in 25 professional bouts. Considered by many to be the ‘next’ Sugar Ray Leonard for his flash and sizzling hand speed.

On that night in 1990, Julio Caesar Chavez lost the first nine rounds of the bout as the dynamic Meldrick Taylor put on a virtuoso performance. However it soon became clear that while Taylor was landing a massive quantity of shots, Chavez was landing hard telling blows. Though few and far between, his brutal punches were extracting a cost from Taylor that would ultimately tell the tale.

For Crofty, Adam and myself, these ‘failed’ attempts in the lead-up to achieving our elusive ultimate goal are reminiscent of Julio Caesar Chavez on that night.  While we still aren’t ‘winning rounds’ we are laying the foundation to ultimately win the fight. We’ll ‘take three to land one’ if that’s what it takes.

From rounds’ 10 to 12 Chavez began to steamroll Taylor landing with more consistency, more power and each punch having more effect on the ailing Taylor. The fight ended with Taylor being T.K.O.’d at 2:58 in the 12th and final round. Two seconds left!

Whatever your goal is and no matter how far away it looks, just keep moving forward towards it. You might have to ‘take three,’ you might have to take more but remember the way of the Mexican Warrior…

Outlast, outwork, outfight, out battle. Relentless until the end.

N.B. Though he was dropped in the last round Meldrick Taylor did get to his feet by the count of 10, however he never responded to the referees questions asking him if he was alright to continue. Referee Richard Steele then waved the bout off declaring a Technical Knock Out. That was the beginning of the end for Meldrick, he was never the same fighter again and his life and career deteriorated from then on. He has severe Dementia Pugilista, partly due to the punishment he copped during and after that fight. He was fighting in club fights up to as late as 2002 and getting bashed by nobody’s. He also battled crack cocaine addiction during his demise.

Julio Caesar Chavez stayed undefeated until 1994 and retired with a legends record of 107 wins, 6 loses and 2 draws. Also in 1994, he rematched Taylor and knocked him out in round 8 that sent Taylor from one side of the ring to the other. See the highlights of their first fight here: