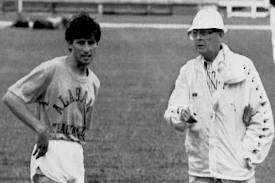 On track: Sebastian and Peter Coe

It’s really difficult to define what a training program should be. There’s many different theories about what works best, over how much time and how many times you should do it. Who knows? I don’t. How can anyone know what the best training is for the next man, woman or child?

Last week I heard the great Sebastian Coe talking about his own training during his developing and competition years of the 1970-80s. He said, “The training has to be systematic, progressive and it has to be hard.” Great advice from the former champ and it’s important to note that while Coe appreciated the hard work element of his regime he was not a reckless warrior. Coe, trained by his father Peter whom held no athletic pedigree, was considered an under-trainer because he shunned the high volume methods popular in New Zealand and Finland at the time. The Coes worked on a quality before quantity method that was good enough to garner two Olympic golds, two silvers and the 800 metre world record that stood for seventeen years.

While we aren’t all runners, much less world beaters, we should adapt the Coe method to our training regardless of our pursuit and level at which we perform. It’s simple to use this as foundation and add your own content to the equation.

Systematic: Your training should follow some sort of system so you can mark improvement/decline in various areas over time. While variety is important in training, so to is revisiting the same sessions at points throughout the year. A good idea is to roll a monthly or quarterly cycle with many of the same workouts included. It’s a good feeling when last month’s ‘pain train’ becomes just another run in the park. Not only are you faster but you recover quicker. “Bi-winning” – Charlie Sheen.

Progressive: The training workload needs to build slowly. How many ‘Nuffys’ have you seen go like the clappers for two weeks then fall in a hole never to make the start line of the event they were ‘gonna’ dominate. Most of us had some athletic prowess in high school but you can’t jump straight back into those sessions if the only thing you’ve climbed since graduation is the cholesterol readings. Progression is doing work, reflecting, then adding distance and intensity working towards the goal. If I’m out of sorts, the first month to six weeks is just going through the motions. “It’s hard to go hard when you’re not fit” – Sean Bowes.

Hard: When the time comes there’s no escaping, if you want the prize the work has to be hard. Lots of it, all the time. However, if you’ve got the first two steps of this right, i.e. systematic and progressive, when the hard stuff comes you’ll be ready to dive right in. When the system is good, you’ll see improvement when revisiting sessions and if your progression is right, you’ll have tipped in just enough intensity each month to give your body time to adapt. Now, the pain comes but with some pleasure. “International running is about feeling tired all the time” – Sebastian Coe.

I’d say, build your system, weak strategy leads ultimately leads to failure. Progress in stages that challenge you but allow for adaptation over time. Work hard, when the time’s right be prepared to pay the price.

Be, “Systematic, progressive and hard” – the Sebastian Coe way.