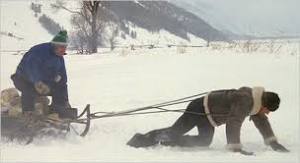 Cracking In: Be The Worker Not The Passenger.

The start to the year has arrived and with it new enthusiasm for another launch into a health and fitness regime. It’s beautiful to see people getting back into routine and facing the training programs usually put on hold over the Christmas period. There’s plenty to get excited about with summer Ocean Swim Series races on all over the place and only a few months until the winter road running season, starting with my favourite, Canberra Running Festival.

So the first ‘ridgey-didge’ week of the year is an opportune time to get into it. A new year, fresh hope, high expectations, you can ride this for all it’s worth. Even if Monday is still Monday, the ring of 2015 helps some people bring more energy to the contest. It’s good to square off the Christmas/New Year celebrations and decide on a game plan that instills routine and sacrifice other than the ‘routine sacrifice’ of one’s own liver.

So if you decided to get fair dinkum this week, like I have, you’d be feeling the soreness of regular exercise and general shock to the system. Muscle soreness, increased appetite and desire to sleep are common traits of the early stages of training. I say, during these times just relax and let it take hold. You’re just adapting. I usually write the first month’s training off as foundation work, don’t expect any huge results because you’re going to be so bloody tired.

Be patient! The sore, hungry and tired phase will begin to diminish after a few weeks of work. When you’re body accepts this work as normal and bounces back faster between sessions (recovery time is the true sign of fitness), then you’ll notice the big gains. To get to this phase, it’s imperative though you ‘hang tough’ through the hard first month, don’t crack the shits because you feel sore after one week. To tell you the truth I’m right there right now too, this annoyance is insignificant compared with the exhilaration of being ‘up and about’ in a few weeks time.

We face a new year, every year and we know the challenge we’re facing now is just like we’ve done (and won) before. I think, knowing what we’re in for makes the attempt of another year’s work that little bit easier. Goals you achieved last year become just the qualifying mark and further achievement is expected. Conversely, anything you’ve missed attaining is hanging in the ether and still a real possibility.