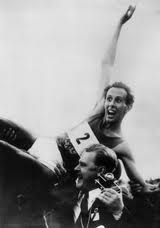 Last week I read a great quote by John Landy, the second man to break the 4 minute mile. Landy says “The mind sells the body” for better or worse this is always the case. When he was training to break the mile barrier Landy was heavily involved in university study and would often train as late as 11pm or after midnight. He said that his mind would often rationalize that he was too tired to run and it was better to leave it until the next day. But if he could convince himself to go out and run a few laps then he would get through the work. “It’s like a car starting, it takes a lot of energy to start, but once you’re rolling, it’s easy.” It’s really easy to sell your body into some good work but it’s easy to sell yourself out of it also. Similarly, the legendary Rob De Castella would say that his morning training was done once he had his shoes on, because you’re not going to take them off once they’re on. The grind is good, get your shoes on early and start some work.