Anyone who trains (or does anything regularly) knows that on certain days you feel good, bad or indifferent about the workload ahead, and for a variety of reasons. Your legs are killing from the squat set you did on Monday, you have young children and haven’t had a decent sleep since the French and Indian War or you could be mentally drained from putting in long hours at the desk.

Whatever your reason. These things do occur and we need to be able to manage a training schedule around such struggles.

I like to produce athletes with a heart for work but a mind for management. Should struggles arise to meet the athlete they need to identify the problem and manage it accordingly. Failing to admit there’s a discrepancy in the program can only manifest for a short time until the ultimate and costly blow up.

Recently I heard a great quote by American Basketball coaching legend, Rick Pitino, who said, “If you admit there’s a problem and deal with it, it becomes part of your past. If you don’t it becomes part of your future.” How many times have we had a little niggle or felt ourselves getting sick and trained anyway? Only to put yourself in the sick bay for weeks after.

I teach my athletes to trust themselves and react to the signals of the body and mind, communicate the feelings with me and together we can devise a strategy going forward. By doing so, the athlete becomes their own coach and I’m just the facilitator with a few new ideas.

This is the first and most important element of the coach/athlete relationship. I say I trust my charges and this is critical because the athlete and coach must walk the fine line between too much and not enough. It’s a test and reassess scenario as we try to push the bell curve forward as far as possible, seeking to gain every advantage while remaining inside the boundaries of fatigue and injury.

Feedback from the athlete is crucial, they know what’s happening to their body better than me, so they let me know. It’s also handy to know about other factors transpiring in their lives that could impact performance. Often an athlete will say, “I need to take out some frustration in the gym.” Here I advise caution because a poor session can exacerbate the stress caused by the initial problem. Sometimes it’s best to go for a walk or look at the ocean, meditate not flog yourself into deeper depression.

Be Your Own Boss

Recently some athletes have said, “Look I couldn’t get a kick in a stampede today, I’m going to take a rest.” This is beautiful. I trust these people are tired and the consequentialist approach of looking at the bigger picture is just what I want. They’re smart enough to know that by showing up they will produce a ‘junk session’ and put themselves further behind and more frustrated. Too many athletes get this idea in their head that, “I need to swim four times a week or I’ll go backwards.”

What do you think makes them go backwards?

Last year I attended a coaching conference with Henk Kraaijenhof, a prominent sprinting coach from the Netherlands. Henk pioneered a program where he’d assess his athletes across muscle energy/fatigue, quality of sleep and a stress test before each workout. Depending on the result of assessment the volume, intensity and duration of the workout would vary.

Henk conducted these tests inside a laboratory using state-of-the-art equipment which clearly we don’t have but he showed a layman’s example whereby it’s possible to achieve similar outcomes by allowing the athlete to self assess before training using the following template. Athletes tick the box which corresponds to their feeling across each performance parameter.

E.g. It’s Tuesday, early in the week. The athlete is looking good. 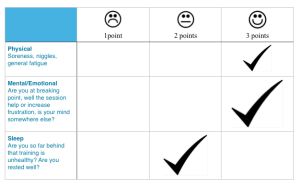 5 – 7 points – Take the edge off it. Start conservatively, work into the set.

With a total score of 8, this athlete should have a decent crack at a personal best session.

Alternatively, by Thursday. It’s later in the week. They blew the barn doors off on Tuesday and had a decent low intensity session on Wednesday. Here’s a likely scenario: 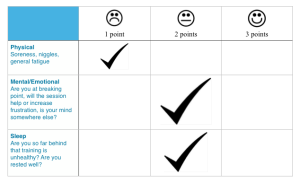 With a total score of 5, I’d make the goal of training to just get through it. No world records. Perhaps start at 70% and spend a while working your way into it. Too many times when we’re battling we try to maintain our best ever times. It won’t work. And when it doesn’t your Mental/Emotional scale will shift further left.

When that happens, on top of which you haven’t had the right amount of kip (sleep) and your assessment looks like this: 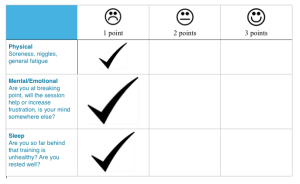 With a total score of 3, you’re battling son. Go have a decent feed and a sleep. Rest up and reassess tomorrow.

If you know someone who trains too hard all the time, click here to Tweet this article.