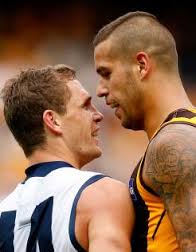 Try Me: Joel Selwood could not be less concerned.

You really have to admire the Geelong Football Club. Love them or hate them, they have been the benchmark of Australian Rules Football for the past seven years. The Cats have built a dynasty, winning premierships in 2007, 2009 and 2011. A stamp of excellence that marks the rich tapestry of Australian Football folklore.

One blemish on this impeccable record was the 2008 Grand Final defeat to a gallant Hawthorn team who trumped the Cats to pull off the biggest Grand Final upset of the last decade. After that day the then Hawthorn president Jeff Kennett remarked that Geelong lacked the mental edge to beat his Hawks when it mattered. He mooted that when times were tough the Cats went missing.

Since that 2008 game and the ensuing Kennett statement the Cats had met the Hawks another nine times. And won nine times. The fabled ‘Kennett Curse’ that accused Geelong of lacking character, hardness and will had come round to haunt the Hawks. Nine times they had tried and nine times they had been narrowly beaten in hard, tough games. The boot well and truly on the other foot now.

I could not be less sympathetic for Jeff Kennett or anyone at Hawthorn. However this so-called ‘curse’ is alive and well in the A.F.L. Since 2008 the Cats have won another two premierships and Hawthorn have crumbled when heavily favoured in finals campaigns of 2011 and 2012.

Why do I love Geelong? I don’t. I hate them!

But I respect them.

On Easter Monday 2013, the two teams met for game 10 since the ‘curse’ descended. I watched closely as Hawthorn took the early break and looked to be doing well. Though looking closer, the Cats were never too far away and they knew that they’re presence, just trailing on the scoreboard was the worst case scenario for the shaky Hawks. They were like the person standing too close behind you at an ATM in Dakabin, you’re never comfortable.

On five occasions during monday’s game Hawk spearhead Lance ‘Buddy’ Franklin took the liberty of bowling over the Geelong captain Joel Selwood. Each time the frustration grew, not from Selwood but rather his perpetrator Franklin. Selwood is a true hard man and master of the football mind. He sat happy to take everything that Buddy dished out to him knowing that each time he was getting further under his skin. Before too long, the distracted Buddy was missing shots at goal and overrunning marks while the Hawks his were running out of legs.

Inside the eyes of Joel Selwood you could see the composure of a true champion who was 100% certain of himself and had full faith in his team. He knew they were superior and while the scoreboard was not showing it yet he held faith that the team’s systems and structures would ultimately prevail. The Cats don’t waste time puffing their chest out and trying to bully the opposition off the ball, they just get on with the job. No fuss. They call the bully’s bluff and take it from there.

As for the result of the game? After winning the last nine clashes, when the final siren rang on Easter Monday it was: