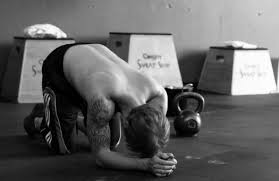 How fit are you?

Most people would answer with their best time around Centennial Park or ‘The Tan’ (Melbourne) or how many kilometers they swum that morning or how much CrossFitt they can do. You’ll definitely hear about it from CrossFitters, more than necessary I’d predict.

So everyone’s working out. Even yoga or pilates is solid fitness. Perhaps not as taxing in cardiovascular or resistance terms but it’s heart rate elevation all the same and can be mentally tough, that’s if you, “Like to break a mental sweat as well” – White Goodman.

When you’re getting fit, that is gaining fitness, starting from nothing the improvement is dramatic. That’s why it’s common to see fitness businesses sell short-term/high-intensity/large-improvement packages, usually on a time frame of between eight and twelve weeks. At the end of it, you’re better off than when you started (whatever that means), you’re lighter, faster, people are rock climbing on your body. Thanks for coming.

Feels great hey, or does it?

Typically during the first 8-12 weeks of training fitness levels explode with all the new stimuli the body is receiving. Training five times a week for the first time ever has dramatic effect, but is it true fitness?

Following the first phase is comes the second phase.

Fitness levels plateau and improvement diminishes, alas the law of diminishing returns. When you buy a Christmas Ham, the first dozen sangas are great, the last dozen are just hard work. Training is the same, whether your staring at a leg o’ ham or a squat rack, when are you at your best? Anyone can go like Lasse Viren at the for three weeks, but can they finish with a lasting legacy like him?

As humans, we can only get so good. Getting to 90% of our potential takes about 10% of the work, once you’re good the workload shifts to 90% work for 10% gain, maybe less. The results become marginal and more time consuming. That’s why you hear stories of guys who ran 48 seconds for 400 metres in grade 12, who took up sculling beers in 48 seconds rather than dedicate the time to further improvement on the track.

Myself and any coach who knows his ass from his elbow (many don’t) will tell you that true indication of fitness is in the athlete’s recovery time. Do they back up well, set after set, session after session, month after month? Does their heart rate rise and not come down until the 12 week hiatus is over? Not if they’re truly fit.

A favourite session I set this morning, 8 x 400m on 2:30. Note: there’s not much recovery time there. 400 metres is long enough to make you hurt but short enough to really test your speed. It’s a classic ‘speed-endurance’ session.

A battler will give you four good efforts then watch them fade. An athlete that’s truly fit, recovers quickly between then efforts and runs consistent times on every effort, even sharpening towards the end.

This is when you’re fit. When you can bust your fufu in the session and minutes later feel fine. Not someone who trained hard for a few months back when Brisbane were still called the Bears.