Hear that? The sounds of stamping feet. Whether it’s due to the excitement of being part of the rush or for fear of being trampled by marauding interlopers, early race speed (or excess of) is hard to avoid. Admittedly, you’re rested, excited, and somewhat anxious about your performance even though the race is but seconds young. It’s natural to get ahead of yourself and overemphasise the need to avoid “getting boxed in” during those early stages.

Hold on. Wait a second. Boxed in? In a half marathon or marathon?

Yes it’s true. Well true that runners think they’re at risk of “getting boxed in” during those frantic race starts. I know, I’ve been there and done that, more times than I’d like to admit. (Anxiety is a punish.) The great Jack Daniels (running coach), (yes that’s his real name, and he too is a legend) said once, “Most mistakes in a race are made in the first two minutes, perhaps in the very first minute.” It seems absurd given the race will last several hours yet could be crippled by a lack of discipline in the very first minute.

But when I think about it, anytime I’ve come a ‘cropper’ in a race I’ve been far too impulsive in the initial stages, got in way over my head and then struggled with the reality of getting to the finish line. Think about it like a shopping spree. How impulsiveness often takes over and you get the old credit card out only to realise later that all you’ve really bought yourself is more junk plus a relentless, painful repayment period. Running is exactly the same.

So don’t get in over your head. Easy said. But how to do it in the race?

So most of us wear GPS watches these days, therefore it’s easy to monitor your pace. There’s really no excuse for you guys.

However, I say that in the hope that you don’t run along checking your pace watch every five seconds and running in a constant state of reaction to your watch. This is a trap too. Don’t do this. What you should do is check in every, kilometre or mile and, if required, adjust your pace accordingly at these markers. In most races you’ll find a pack around your pace to nestle in with that will help you regulate.

Here’s the tip: at the start of a race, you’re always running faster than you think. A first kilometre up to 30 seconds faster than your goal pace is common. Yes that’s right, 30 seconds! But what do you think happens if you take 30 seconds here? That’s right, you have to pay that back, with interest, later on. Like the shopping scenario.

If you’re likely to get this rush of blood to the head and crack in way too hard early you only need to keep in mind the duration of your event. It can be 2-5 hours depending on your level and race distance. Trust me there’s plenty of time to pass those people who you thought were boxing you in one, two, three or four hours ago. Plenty of time.

Let’s say you don’t have a watch, don’t want to wear a watch or whatever. That’s ok too. I often race and train without anything, it helps me to ‘feel’ the race and self regulate. Though I must admit, in longer races like marathon and half marathon it’s bloody handy to have that watch for the first say, ten minutes. During the ‘feeling out’ stages.

So if you’re running on ‘feel’, your watch won’t turn on (common), you can’t find the satellites (more common) or you forgot to press start at the start of the race (hard to believe but so very common).

My best advice is don’t stress. Always be cool.

Then think, “Wipe off 5.” I always remember a sponsor that Collingwood had about 15 years ago on the back to their guernseys that read “Wipe off 5.” Whenever I start a race, I’m like you, feeling good and fresh and always optimistic about catching and passing those guys who realistically are a bit above my level. I ground my myself by saying, Wipe off 5. That is, wipe off 5% of effort and intensity to allow for that extra excitement that I’m feeling because this is a race scenario. I do this for about the first 3km (or first ten minutes of running). It’s so, so hard to resist but it truly pays off and after a while I’m happy I was the boring guy.

After ten minutes of running, you’ll be able to find your groove with a similar paced pack of runners and away you go. Then you avoid being that jive turkey who that very pack swallows after 30 minutes, never to be seen again.

Train it. In your race week practice your race ‘starts’. Here you will pretend you’re starting a long distance road race whereby you take off like a race start before quickly settling into a race rhythm. Be light and quick, settle in fast.

A good session around 5 days before your race:

If you like this advice, you should download my FREE Marathon and Half Marathon Faster e-book (opt-in required). You’ll go onto our mailing list and get expert training advice, race preparation strategies and funny stories from the Sean Bowes running stable that spans the world. Click below… 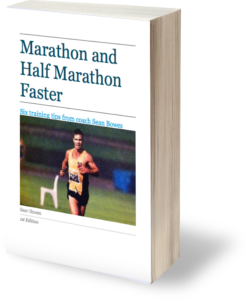