I recently read Deep Work by Cal Newport, a book that scrutinises people’s habits and advises on strategies for productivity. Newport lists several ‘high status’ practitioners and outlines how they get significant amounts of stuff done. One thing’s for sure, no strategy is the same and there’s no one rule that works for everyone.

Reading such material often prompts a sudden shift to emulate the champions of the book. Which is good. Though it takes deeper reading and situational analysis to decipher what you should use and what you should leave alone. If you were to apply this ‘read-act’ approach to your health and fitness preparations it could be dangerous.

Late in the book, Newport states, “A commitment to deep work is not a moral stance and it’s not a philosophical statement – it is instead a pragmatic recognition that the ability to concentrate is a skill that gets valuable things done.”

I think it’s easy – in fitness especially – to grab hold of a trend and apply its arbitrary rules that don’t always lead to results – in your case. Reading a health magazine an athlete might notice a citation from a prominent guru and change their philosophy on a dime, despite the success of what they’re currently doing. Within minutes they can convince themselves they need:

Once convinced this is what they need, they train-the-house-down, start shopping at Whole Foods and vow to never socialise again. But hang on, you were going so well already? Will this drastic shift improve your output? What about the rest of your bloody life, man?

A couple of campaigns ago I was reading Running With The Buffaloes and came across this quote by coach Mark Wetmore, “Never underestimate the value of a thousand miles in ten weeks.” So what do you think I did? By week five, I was renting space on the physio’s bed and come race day, I was holding the water bottles. Good living.

It’s hard to ignore the great, new thing when these sources offer such compelling case studies and success stories. But most philosophies, like the list above, are arbitrary ideas that do work but are usually inappropriate for your scenario. Like my 1000 miles in ten weeks, the guy for whom that statement was intended was an elite College runner and future Olympian. I should’ve stuck to what I do. (Live and learn.)

I like Deep Work because it pitches a costs vs. benefits analysis to the strategies it presents. To repeat, these ideas are “not a moral stance and it’s not a philosophical statement”. So before you throw the baby out with the bathwater, just ask yourself, do I want to race or hold the drink bottles? What’s more important here? Then use a pragmatic approach to get you there, instead of following a rule that won’t.

For example, Deep Work proposes a chapter titled, “Quit Social Media.” Newport bashes ‘social’ from pillar-to-post for all the reasons we already know. But in closing – as above – he concedes, “I’m not arguing that everyone should stop using Facebook… I can imagine plausible scenarios where a tool like Facebook would have substantial positive impact and should be used”.

There’s no need for some draconian approach to your next fitness quest. This is your quest remember. You need to be able to get this done. Not just shout a bunch of slogans about your clean living and four weeks later be hobbling around Stafford City eating a half doz. cinnamon doughnuts to ease your injury depression.

Ironically, decades after Running With The Buffaloes famed Wetmore’s heavy training loads he quipped, “These days were doing less and we’re winning more.” I think it’s more fun to brag about winning than your hardcore “moral stance” that doesn’t work.

“… and you shall see in them the contrasts between what men are and what they pretend to be, what they aspire to do and what they have it in them to achieve.” – Molière. 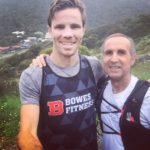 I’m Sean Bowes, 2:26 marathon runner and sub 70 minute half marathoner. An Athletics Australia accredited coach I, coach runners in distances from 5km to marathon, either personally, online or in my Sydney-based training squad. My squad members have had success in:

I draw on years of experience in competing and coaching to give informative advice and tell interesting yarns about colourful characters and unusual situations in sports to keep training entertaining and a learning experience. My flagship introductory offering is my FREE ‘30 Days to 10k’ Training Program, click here to get your copy.