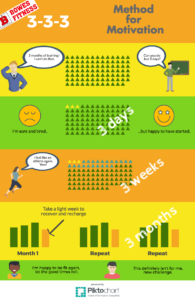 A system for success, a method for motivation, how to kill it like never before… Yeah I know you’ve heard it all before but I read something recently that might really help you out. When it comes to health and fitness, I think a lot of us follow a similar cycle, something like this – go hard, get the shits with it, abandon, (try to) comeback, either succeed or fail. What I want to talk about here is the success of our re-ignition phase.

Reading the autobiography of Australia’s greatest ever Olympian, Ian Thorpe (I believe Edwin Flack is still the undisputed king), recently I was drawn to his comeback campaign prior to the 2012 London Olympics. I saw similarities to our own fitness struggles in Thorpe’s, 1) leaving the sport, 2) desire to comeback. But where Thorpe excelled – in my view – was, 3) his method to not get overwhelmed and maintain motivation for the duration of his campaign.

Thorpe says that he didn’t necessarily hate swimming at the time but had grown to hate what it had become to him. It dominated his life, his identity and at a young age he wanted to experience life outside those confines.

I see people all the time getting worn out with their training programs and they desire to try other things. Whether that’s other sports, watching sports or downing schooners with their mates all weekend, I guess you need to refresh.

Alan Watts says, with the lull of a wave must be followed immediately by a crest. Our training cycles and moods towards those cycles are similar. After four weekends throwing around the same rubbish chat with your buddies bar-side you’ll be just as eager to brush them as you were to hang up your heart rate monitor.

On a plane flight between Chicago and London, with nothing good to watch on the Tele and unable to get some lovely rest, Thorpe began to wonder. And wonder. And wonder, what if, maybe he pulled the chungas back on again. Working in London at a pre-Olympic competition, his thinking was reenforced with the feeling around the pool, the excitement of racing again took over.

3) A method for motivation

Before pulling the chungas back on Thorpe put a three month training schedule in place, this is a fairly common training macrocycle, no biggy. Where Thorpe’s method excelled, of mine, was how he broke that three months down and used his body’s natural adaptation as positive stimulus to continue the training block.

This is where’ it’s all at, read below…

With the aid of his psychologist, Thorpe decided,

“I’d commit myself to at least three days, no matter how crappy I felt. If I got through them then I’d commit myself to three weeks and then three months. After that I’d be in a better position to decide if my return was serious or just an interesting little experiment that I could abandon without anyone being the wiser.”

I think this is so ingenious, it sounds simple yes, but it’s common for athletes to make predictions and statements, for better or worse, based on no recent evidence or experience and by the same token they can be put off by the seemingly arduous road ahead. It happens all the time. Remember the game Pacman? Now Pacman can only take one bite at a time but he keeps on going. The advantage we have as athletes is, falling back in love with the fitness and routine will grow over those first three weeks, and who among us can’t outlast the soreness for three days?

Even training if you trained the first three days (Monday, Tuesday, Wednesday) of Week 1 then took four days to recover. It’s a start. Though, my experience suggests you’ll be back into it before Monday comes. I remember Will Smith saying, “Once you decide, the world will get out of your way.”

Growing into your program you’ll be – like Thorpe – in a better position to decide whether you’re legitimate in your endeavours or barking up the wrong tree. It could well be a decision to the negative, but I argue, isn’t it better to make an informed decision based on evidence and experience? This is where the 3-3-3 method could help, firstly not to get overwhelmed by your goal, secondly, to stay true throughout the campaign and finally give you the time to get the fitness benefits and decide whether it’s a hot or cold meat pie. Will you drop it or take another bite?

The factor of three is significant. Give it a go.

Click this link to access my FREE 3-3-3 Method for Motivation Infographic. Feel free to share it with your friends on social channels too, if you don’t mind please link your post back to this page http://bowesfitness.com/method-for-motivation-blog/