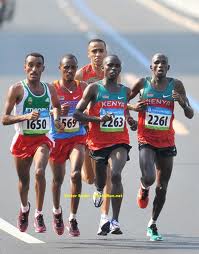 Sadly there will be no New York Marathon this year due to the natural disaster that occurred recently. Hopefully NYC can get back on it’s feet before too long and we’ll see a huge NYC Marathon in 2013. Now there has been plenty of noise around about people’s interest in running a Marathon in 2013. Some are headed for the Marathon de Paris on April  7, others to London on April 21, but most will be tackling the epic Gold Coast Marathon on July 7. Whatever race you are doing you should look at your schedule now and plot a lead-up course to the main event, build a training and racing plan that will see you peak on the big day. The all-encompassing approach to preparing for a marathon is similar to the very detailed and intricate methods used by rice farmers in Southern China, highlighted below in an excerpt from Malcolm Gladwell’s ‘Outliars.’

“What redeemed the life of a rice farmer was the nature of the work. It was a lot like the garment work done by the Jewish immigrants of New York. It was meaningful. First of all, there is a clear relationship in rice farming between effort and reward. The harder you work a rice field, the more it yields. Second, it’s complex work. The rice farmer isn’t simply planting in the spring and harvesting in the fall. He or she effectively runs a small business, juggling a family workforce, hedging uncertainty through seed selection, building and managing a sophisticated irrigation system and coordinating the complicated process of harvesting the first crop while simultaneously preparing the second crop.”

The beauty of running, like rice planting is that your effort’s will be rewarded. There’s very little luck involved in a running fixture, it almost always comes down to who trained the hardest and the smartest. Moreover, there is complexity in the work. The only people who have told me running is boring couldn’t run out of sight on a dark night. Juggle the workload like the rice farmer. Build your base, then get into your speed work, and capitalise on your long runs. Go to bed early and avoid the dark temptations of the night. Anyone can have the marathon but it comes at a price.