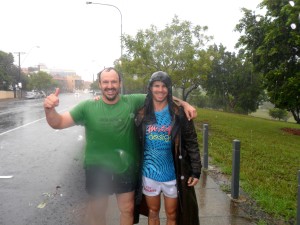 No Excuses in Vic. Park

The rain has been relentless up and down the Eastern seaboard over the last week. I had the fortune (or mis) of being at Brisbane airport for half a day during this time as my flight back to Sydney was repeatedly delayed and ultimately cancelled. The fortune in this situation was that witnessing this crisis at the airport I would see two types of people emerge.

The ‘winners’ and the ‘losers.’

The losers were the people, we all know them, pointing fingers, ranting at staff and blaming the airline for their ‘so-called’ misfortune. All sorts of outlandish claims like “I’ll never fly with this company again,” or “This is a dead set stitch-up” and my favourite,  “Luggage only 15kg? Bullshit to that mate, my hair weighs more than 15kg’s.” The elements were out of human control, not even Garry Ablett Senior can stop the rain. So time came for the ‘winners’ to shine through.

Conversely, the winners were resilient, resourceful and respectful. They would search for a positive alternative rather than someone to blame. They appreciated that the inclement weather was superior to human intervention and would be for some time and respected the decision that saw them sent home while things got sorted out.

So what did you do when then bad weather came? We’re you looking out the window like a skeif thinking it’s all too hard or were you out there training anyway? Were you a winner or a loser?

The winners didn’t waste any unnecessary energy fighting a battle they couldn’t win. George Foreman (former 3 x World Heavyweight Boxing Champion, Lean-Mean-Fat-Reducing-Grilling-Machine sales guru and major spokesman for the ‘Life Begins at 40’ campaign) always says: “let sleeping dogs lie,” move forward toward the next challenge or resolution, that’s what the winners did on this occasion. Meanwhile, the loser’s were still at loggerheads with themselves, the airlines and the gods. By the time the loser’s had stopped ranting, the winner’s were back at the rooms sorting the alternative and getting on with small tasks to keep their mind off the problem. While the loser’s complained that they can’t train outside in the rain, the winner’s were getting tough in the rain anyway or training indoors – going to the gym, indoor pool or running on the treadmill, doing push-ups, planks or sit-ups.

When Collingwood drew with St. Kilda in the 2010 Grand Final, coach Mick Malthouse told the players one thing. “If we see this as a loss, it will be – but – if we see this as an opportunity, it will be.” Now, I’ve let most people know that Collingwood went on to win the replay one week later and claim the 2010 A.F.L. Premiership. Were Mick’s words responsible for the composure and belief around the club during the supplementary week of the 2010 season? I’m sure they helped.

So whether you were at the airport or at home, wet or dry, in the gym or in the jungle, there’s always room to do something that the others won’t. Moreover, it’s a chance to get the jump on the ‘losers’ who have all but given up on the challenge and are still crying about something they can’t change. If you have the ‘will’ do do what they won’t, that’s immediately your advantage.