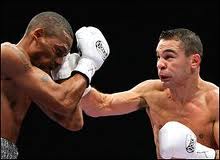 Behind Jeff Fenech I rate Robbie Peden as Australia’s greatest boxing export of all time. He was a two time Olympian in 1992 and 1996, Commonwealth Games Gold Medalist in 1994, winner of numerous Australian titles and most significantly World Super Featherweight Champion. Peden must be respected for, unlike Fenech and other Australian greats, all but two of his professional fights were held overseas and anyone that knows boxing can tell you that fighting abroad is much harder than fighting at home.

Besides Robbie’s obvious boxing cred, the reason he comes up this week is that he came to mind during training last week. Anyone that has ever met ‘Bomber’ can tell of his laid-back attitude and larrikin behaviour that endears him to anyone he meets. An attitude that he carried throughout his illustrious boxing career and the results speak for themselves.

In early 2005, Robbie was finalising his preparation for his shot at the World Title against slick American homeboy Nate ‘Galaxy Warrior’ Campbell, by doing tough sparring sessions with promising local protege Todd ‘T.K.O.’ Kidd. After 4 hard rounds of sparring with his mentor and exhausted Kidd posed Robbie the question, “how on earth do you fight for 12 rounds?” Since amateur fighters (at that time) only fought 4 rounds. The answer from Peden was simple, “mate if you can do 4, you can do 5… if you can do 5, you can do 6”… and so on he went.

This relaxed, almost carefree approach to more volume in training proved to be a very successful recipe for Peden as he went on win his upcoming world title bout by T.K.O. in the eighth round. Peden was a master of enjoying the work load and taking each round as it came, he never got too flustered about what was to come in the rounds ahead. You can only fight a round at a time so deal with it when you get there.

So last week, in my own running training when the volume was increased from (8 x 500m, 4km tempo) to (10 x 500m, 4km tempo), I thought constantly about Robbie’s wise words from all those years ago. If I could do 8, I could easily do 10. I just had to relax and enjoy the work and take on each effort as it emerged.

With some of my charges deep into preparation for various marathons around the world (1 running Los Angeles, 2 running Paris, 5 running Canberra, 1 running London), long runs have moved to the top of the agenda for these athletes. Each week they try to push that little bit further, 25km, 30km, 32km, 34km… and to these people I pass on the words of the great Robbie Peden – “If you can do 30, you can do 32… if you can do 32, you can do 34. Relax and enjoy the work. You can’t run the 34th kilometre until you’ve done the first 33.”

See Robbie’s first stunning victory over Nate Campbell below, the eventual ‘title’ fight pitted these two again (check Robbie’s nod to the audience after  the K.O. what a guru).