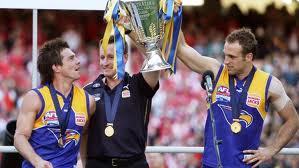 It’s a new year and most of us are coming off a Christmas holiday period of excessive consumption and we’re facing the task of climbing a new mountain, called 2013. I belong to this group, this year more than ever, but I’m comfortable with my decision to cease training for two weeks over Christmas and indulge in areas that were neglected during a year of solid training and competing.

Some of best athletes (well most that I know) take this approach to the periodisation of there training and competition schedules. Since it is clear that we can’t be peaking all the time, it is important to embrace the rest period and give yourself a chance do unload some frustration built up throughout the year.

One athlete that comes to mind as embracing this ‘boom/bust’ approach is the once mighty Ben Cousins. Most of us know the story and can feel however we want about Ben’s situation. To look deeper, there was certain method to the madness. Embrace Ben’s ‘I wouldn’t even butter my toast’ principle is a great advantage when you are trying to map out your training plan for the year ahead.

As I stated earlier, periodisation of training is super important for all athletes or anyone doing anything physical. If you want to be ‘cherry ripe’ in July there’s no point busting your ‘fufu’ valve in the January heat. You need to know when it’s time for ‘on’ and when it’s time for ‘off.’ ‘Off’ being just as important as ‘on.’ Be like a racehorse, work hard then go out to the paddock for a while and regenerate, give the body and mind a chance to recharge and refocus.

In the same way, Ben once stated that when he was ‘on’ and into his training and competition that he was so stringent, so meticulous, right down to the very last detail that he felt that it was advantageous to neglect putting butter on his toast. In the next sentence, he went on to explain how when the game was over he would “launch” into a total bender. This is an athlete who knew what needed to be done in order for him to be ‘cherry ripe’ right at that optimum time, in a crunch game to display that moment of greatness that would make the difference.

So over Christmas most us, me included, have ‘launched’ into our respective vices and had a great time doing it, but has your time come to ‘stop buttering your toast?’ Is this the time you get serious and forget about the fun of the ‘launch.’ Most would agree, and I think this is where Ben was going with his story, that the ‘launch’ is only as special as all the sacrifices that lead up to it. Who’s prepared to do what it takes to get to where they need to go?