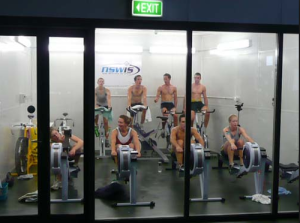 Hot Training: It’s a trend but be careful.

In these early months, January and February especially, a temperature increase makes for less than ideal training conditions. Depending of course on your perspective, if you like a shirts off, glistening in the sun, training in front of a scenic backdrop à la Patrick Swayze in Road House, then Down Under this time of year really is your packet o’ biscuits. It’s real steamy down here, and hats off to Brisbane residents who endure a thunderstorm a day and mid 30s by 9am and still get their work done. That’s commitment. However, training in the heat evokes many questions about sense and sanity that we should consider.

There’s been a trend of late for elite athletes (A.F.L. footballers mainly) that venture to warmer climates to train under severe conditions with the thought that this aids the training progress over time quotient, similar to altitude training. Opinions on this theory are divided. My view, you train in a tougher climate sure, but your quality of work will be lower. You rob Peter to pay Paul. I do agree that hot training is massively beneficial when you’re due to compete in a similar climate. Australian marathon running ace Michael Shelley, undertook a brutal training program in the North Queensland town of Cairns before competing in and claiming a silver medal at the 2010 Commonwealth Games in Delhi, India. He says and I believe this, the hot training cycle was a huge contributor to his performance which saw him steamroll some fancied Kenyans in the closing stages of the marathon.

For me, living in coastal Sydney where the weather is usually very comfortable, I really struggle on the hot days, I’m just not used to it and a little bit soft under that pressure. The old Chocolate Soldier. So the acclimatisation factor used by Michael Shelley is always useful. I’ve heard stories of people wearing raincoats in training to prepare for Ironman races in Cairns, Thailand and Dubai, similar train of thought. Don’t take a knife to a gun fight.

While I’ve just talked up the benefits of hot training we should always respect heat and remember that we are humans that require certain bodily elements and intakes to function. It’s ludicrous to imagine you are going to be producing your best ever results under the strain of high temperatures and off the charts humidity levels. So while it’s good to work hard when it’s hot, don’t go like a sewing machine and expect to last the distance at top pace. Moreover, your hydration becomes vitally important and so does diet. Your body is going to be working that much harder to keep yourself cool, you need fluid and energy to feed it that extra amount.

The torturous hot training can be advantageous for all athletes, no question. If pursued with caution we can make the most of the conditions and use them to our advantage. Leo Manzano (USA) Olympic silver medallist over 1500m at London, 2012 has many rare qualities that make him a champion, one is his rather unusual choice of using Austin, Texas as his training base, not standard athletic hubs like Boulder or Eugene. He admits the heat makes training tough but yields to declare whether the heat itself is the ingredient that provides advantage. The training is harder but the performance levels are lower, there’s the trade off. However, from this climate come other advantages pertaining to discipline, organisation and being a better human. Manzano states, the heat definitely exacerbates hardship on the track but more than that it exaggerates need for better preparation and cleaner living. “Because of the heat, I need to be off the track by 9am, that deadline means I need to be organised and in bed early, hydration is also critical,” he says. He’s a fine ‘working man’s’ example for people who fit training around an already busy professional, familial and social schedule.

– Train in the heat but respect it, listen to your body and know that things will move slower when it’s hot. Accept it.

– Get organised, don’t tell me it’s too hot to train, you just haven’t got out of bed early enough.

“That’s the problem with schoolboy rowers, Christmas holidays come around, discipline’s out the f’n window, they stay up til all hours watching the Idiot Box (TV), sleep in til 10am, it’s already 35 degrees. There’s that day rooted.”

From the desk of Sean Bowes in the Content Factory.