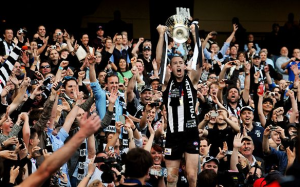 The People’s Cup: Nick Maxwell and the Collingwood Army

This week, when Collingwood player Nick Maxwell announced his immediate retirement from football, his message to the player group was this:

“Take control of your destiny. Don’t blame anyone or anything else. Whatever you want to do, just go do it yourself” – Nick Maxwell.

This statement is significant for anyone trying to achieve a health and fitness goal and feels like the odds are against them. Maxwell is universally regarded as a player who, “Got the very best out of himself” during 208 games for Collingwood.

Not really talented, ‘Maxy’ used hard work and self-belief to elevate himself to a first class player. A true battler who was rejected four times by the Geelong Falcons (development team) before succeeding on attempt number five. Maxy was then passed over at the AFL National Draft, only to be thrown a lifeline by Collingwood with a spot on their Rookie List for the 2003 season. He debuted that year.

Maxy’s relentless drive and bullish self-belief that saw him finally secure an AFL guernsey remained evident throughout his stellar playing career in the ‘Black and White stripes.’ This workmanlike attitude impressed outgoing legend Nathan Buckley who endowed Maxy with his famous number 5 guernsey when he retired. The gesture proved an omen when Maxy was appointed club captain in 2009.

The romanic ‘battler to legend’ story is not important here (Collingwood does them all the time). Rather, it’s the legacy and challenge that Maxy bestowed upon his teammates that I’m interested in here.

Requesting his peers to “take control” and “don’t blame” is something we should all listen to and learn from. It’s too common for people to identify external factors as justification for their own underachievement. Blaming the ‘cold’ Sydney winter for staying in bed or justifying your comparative lack of success with, “Oh but they’ve more time to train than I do” is not living the Nick Maxwell way.

My friend and prominent marketing author, Adam Franklin of Web Marketing That Works, puts it simply,

“Everyone’s got the same twenty-four hours in the day, it’s up to you how you spend them.”

Franklin (3:34 marathon) lives the Nick Maxwell way by taking control of his life and matters within it and most importantly, never looks for external excuses when results are substandard. He knows that spending more time on the rug than King Solomon is par for low expectations in personal fitness and conversely his or someone else’s hard fought marathon ‘personal best’ is as they say, ‘self made.’

Franklin’s simple explanation inspires me to focus on what I havegot, rather than what I haven’t. People aiming for peak personal fitness are either too quick to palm off the challenge of “taking control for their own destiny” with a list of reasons why they haven’t got enough time, money, ability, intestinal fortitude, or they’re simply too embarrassed to believe. They listen to the people that Nick Maxwell defied.

Let me tell you something, Nick Maxwell didn’t have it either. Outside of himself, his family and the Collingwood Football Club, Maxy was widely considered overrated, a bad captain, limited ability, the list goes on. But I’ll tell you something else, I was there when ‘our’ Maxy, the guy with the same two arms, two legs and twenty-four hours in the day as all of us, held aloft the 2010 premiership cup to an adoring Black and White Army. That’s how he’ll be remembered, that’s all that matters.

Collingwood forever, side by side.