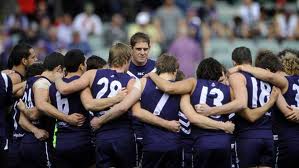 Eyes On Prize: The Fremantle Dockers

It’s Grand Final week in the AFL and the familiarity of the last week in September is settling in. Both competing teams have acknowledged their stellar performance in the season thus far but quickly mention the enormous mountain still yet to climb. The eyes-on-the-prize approach of both clubs were summed up beautifully by Fremantle coach Ross Lyon after last week’s win to qualify for the ‘big dance.’

As coach, I always listen to what other coaches say about performance and preparation. To see what we can adapt to our regime. What can I learn from the masters (and the hacks) that might be useful for my own charges?

The essence of the words spoken above was the theme for coaches across the board as they departed the finals series, one by one, at the hands of opposition’s more talented, more committed, better prepared, luckier, et al. In this immensely competitive environment when whole seasons can be decided by just one great moment (or brain fade), each coach has pointed out the secret to making it all the way through, even if they didn’t.

You’ve got to be ready and presenting your best work when the opportunity arises. Being prepared has many facets, some are:

Often premierships are won on the last-man-standing principle, see Steven Bradbury, but that chance can’t be taken if you’re sitting in the grandstand having a 7-course lunch, (pie and 6-pack). It’s also not going to be won by the guy who was at Melba’s ‘til 5am that morning and it’s certainly not by the battler who only came back to training because he wanted to get the details for the end-of-season tour to North Straddie.

Regardless of the level we train at, we can learn from the above factors in our own health and fitness quests.

Even if you’ve done everything right and followed the preparation plan to the letter and made it most of the way, you’ve still got a problem:

“They’re even harder to win.”

Getting there is just half the battle. Like losing 5kg’s when you wanted to lose 7, personally in know the difference in workload and race pressure between running 72 mins for the half-marathon and 69. It’s huge. Like these guys playing on Saturday, we haven’t done it until it’s done. Ring legend George Foreman once said:

Whatever we’ve done, there’s still more to do. Whatever the goal, we must remain desperate until our day is won.

Do the hard slog.