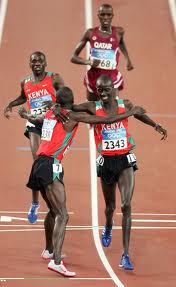 Free and Easy: The Kenyans Do It Again

Facing the outcomes of sports, fitness and health is sometimes difficult. When we pour so much effort into a campaign it’s hard to know how to react when the event is over and the day is done. Challenge also lies in the amount of importance we place on our performance and how much pressure we put on ourselves.

Pressure to go faster than ever before.

Pressure to beat an adversary.

Pressure to not blow it.

It all adds up.

I have the privilege of training in one of Australia’s top distance running squads, the talent is rich and runs deep through all age groups. Being an older member of the group who just does it for fun, I listen to the younger firebrands talking predictions and justifications of their races and results.

It’s horses for courses and some handle the pressure better than others, that’s the same in all facets of life right across society. Though it’s interesting to see athletes who look at the race as a positive opportunity, those who don’t really care and those who talk themselves out of the running before the running has even begun. There’s some who don’t even show up for the race.

I’ve also had the privilege of training with some of the hottest runners in the world in the highlands of Kenya. These guys could run a 10km tempo and be home, showered and sucking down a Chai Tea before some of these Sydney-siders had decided which pair of shoes they’re going to wear.

They’ve got their priorities right.

Another area where they seem to excel and maybe through lack of trying is pre-race psychological preparation. We all remember the phrase ‘Hakuna Matata’ from the movie Lion King (it’s Swahili for no worries). I hadn’t heard it again until I trained with the Kenyans almost two decades later. The Kenyans said it and they lived it. Besides Hakuna Matata their favourite word is ‘relaxing’ and they did plenty of both.

Many sports people, especially the young guys I know, place so much importance on the potential outcome of an event that it becomes entrenched in their minds and dogs them all the way up to the start. Sometimes even into the race. Even after the race.

The very crippling ‘fear of failure,’ is as old as man kind. There’s some literature around saying that it died out when Generation Y hit the scene, I’m yet to be convinced. Maybe it’s lesser now than the days when bible study followed football practice and Dracula lived in the abandoned house at the end of the street, but be certain that  the ‘fear factor’ still creeps up behind some athletes like a librarian.

So many sporting greats looking back on their careers will talk about the suffocating nature of pressure they placed upon themselves to perform. Saying that in retrospect, they would have taken a more low-key approach to games, races or events. They’d have given themselves time to enjoy what was happening around them, so should we. I know the Kenyans do.

The enormous weight of expectation is like a hand-brake on people’s performances, add in the potential race hiccups and they’re really struggling. Sometimes they’re traveling ok but mentally they’re beaten and given up the ghost. The depressing figure of an athlete moping around the finish area, crestfallen because of a marginally worse than hoped for performance is all too common, and embarrassing mind you.

The Kenyans are as competitive on the track as anyone but they are relaxed off it. They just enjoy the sport and are happy to have a run and get across the line. For them to be beaten by a team mate is no big deal. If running second, third or whatever is their best on that day, then that is great.

What can we learn from the Kenyans?

Any given Sunday, you’re either going to win or lose. There’s not much you can do about it but try your hardest to be your best.