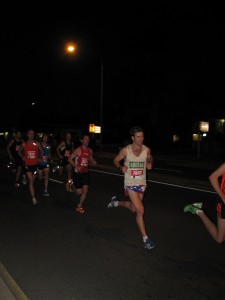 Fast times on the Gold Coast.

We had some massive efforts in the iconic Gold Coast running festival. Two warriors took to the full 42km (26 mile) assignment. Adam Franklin ran a respectable 3:49.32 and Sam Handy battled severe cramping from the 14km mark to post a troubled 5:44.17. You must realise that the hot Queensland sun was beating down while these lads were still competing. With that in mind, this was a great performance.

While in the much easier Half Marathon event we had 4 entries. From the Sydney stable, Phil Pineo smashed his former best time by over 5 minutes to record 1:34.33 and I ran a best of 1:11.31. Out of the Brisbane camp were some former charges of the Team Freedom Boxing Gym, Melissa Argent ran a sizzling 1:39.43 and former Queensland Novice Boxing Champion David Pentland posted a slick 1:28.05.