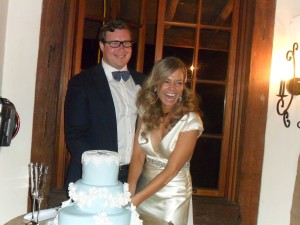 Last weekend we saw perennial Bowes Fitness warrior, undefeated amateur boxer and multiple marathon finisher Sam Handy get married. It was fantastic to see the ‘great man’ tie the knot in front of an adoring crowd. Even more interesting is the tale of how it all eventuated through Sam’s love of fitness and will power to complete any task presented, no matter what.

First, I must tell you that despite attending the same legendary Brisbane catholic school, I did not know Sam very well when I moved to Sydney three years ago. This changed when I caught wind that Sam, Crofty and Adam Franklin had all entered the 2011 Canberra Half Marathon (Crofty the full), as had I.

This was a real boys trip, I stayed with Pat Malone (alone) at the backpackers, Croft and Sam spooned in Adam’s double bed while Adam was banished to the single bed in the room that he booked. Good form boys.

The race went down well with everyone finishing their respective races. On the car trip home with a trophy (from my 3rd place), case of beers and Croft complaining from the pain, the boys were full of vigour for more endurance events in the months ahead, especially Sam.

Later that year Sam put together, in consecutive weekends mind you:

Wow wee! Just writing that made me tired.

Let’s highlight these three occasions and you’ll see why he is known as the ‘great man.’

Can you imagine every fitness bandit you’ve every seen on a morning run, but this is the Oxfam 100 these cats are even more ‘full on.’ Fluro tights, back packs that double as water bags, head torches, hiking boots, those sticks that skiers use (I don’t know what they’re called I come from Queensland), wooly socks, those ‘al foil’ blankets ala a Tony Bullimore rescue attempt. The whole show, cynics would have a field day.

Sam rolls up in football shorts, joggers that would be grippy on a lawn bowling green, a wooly sweater, holding a cup of coffee and newspaper under the arm. He completed the walk, no fuss.

The Bowes Camp was under pressure after two earlier defeats, to in my opinion overmatched opponents, but that’s another story. The main event was Sam who was said to have the toughest match-up of the evening against an older, heavier opponent, a so-called ‘enforcer’ Chris K.O. Roe. This guy embarrassingly attempted to intimidate us by standing over Sam at the corner before the fight, trying to impose his strength or as it turned out, lack there of. I knew everything was ok when Sam turned to me unfazed and said candidly “what do we do here?”

Sam knocked him out in round two and saved the coaching reputation of Sean Bowes. (Insert sigh of relief here, thanks mate).

You can see from the photos that Sam isn’t built like Haile Gebrselassie so you wouldn’t expect him to travel interstate to take one of the hardest races of all, the marathon. He did and he finished it. The time wasn’t great but his pace was consistent. The mark of a man who set himself to run to the best of his ability and drop dead over the finish line.

That evening, at the after party on the Gold Coast Sam met his wife Jess. Rumour has it that our boys were a few levels above the marathon crowd when it came to the night life, which I really love. Jess had also made the journey from Sydney for the race and obviously liked Sam’s work at the party. The rest is history.

What can we learn from Sam?

Sam it’s been an honour to be your coach and training parter for the boxing, annual trips to the Canberra Marathon and other great races and it was an honour to be at your wedding. You truly are the ‘great man.’ 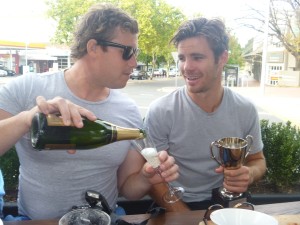