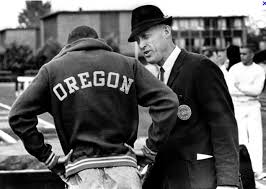 Ethical Coach: Bill Bowerman who preferred to call himself teacher rather than coach, prepared athletes the right way.

I recently accepted the task of coaching (online) a new charge for the Gold Coast Marathon. He’d seen me present a talk on running training at a workshop and thought I had a clue. So we discussed his goal, age, experience and time commitment and I drew up a program to get him there.

After I’d sent the email his response went:

“Hey Bowesy, thanks for the program. It looks awesome and super painful.”

Reading these comments back I focussed on “super painful” and my immediate reaction was to question myself about the severity of the training. Had I gone too hard? Was it too much work? All this despite only a few days earlier questioning whether it was hard enough.

On reflection, I decided the marathon isn’t getting any shorter nor easier so I might as well make him work now and benefit later. An old acting coach used to say to me, “It’s unethical for me to let you think this work is ok. It’s not.” Like my coach before, my job as coach is to provide a legitimate chance of achieving the goal with ethical preparation.

My idea is simple: train harder than you need to, that’s how I wrote the program. He’s going to have enough trouble anyway, the least I can do is make it easier for him on the day. By saying, I’m going for a personal best, you’re telling me you’ve never been to where you want to go. So I’m telling you, based on that information you don’t know what it costs to get there.

I call it training ‘overs’ and it’s the simplest most underused method around. Has there ever been a time that you regretted over preparing for something? Who’s ever been camping and gotten dark about packing two boxes of matches instead of one? No one. Conversely, the guy who didn’t bring any, how dark is he?

In sports, you should prepare for the task to be harder than you thought, if it turns out to be at least you’re ready. If it’s not, you’re ready anyway. Either way, you’re ready. It’s the personal responsibility of athlete and coach to take time in preparation to interrogate this principle. Don’t wait until it’s too late.

Recently, I watched an interview with Mark Thompson the former coach of AFL powerhouse Geelong. Under Thompson, Geelong sat atop of the AFL mountain winning flags in 2007 and 2009. However, during their so-called best year, 2008 they were beaten in the Grand Final. How?

Thompson stated how the he and the team were too obsessed with winning all the time whereby they played their best outfit every week thus perpetuating their peerlessness. For more than a year, his team were never weak, nor vulnerable, nor forced to find new ways to win. When that day did come, during the final game, they weren’t ready and floundered. Lesson learnt. The hard way.

Back in my younger days when I did boxing I learnt many hard lessons by not putting myself to the wolves in preparation only to been eaten up in competition. Though I was fortunate during part of my career to come under the tutelage of a fitness savvy coach with good preparation principles. His methods seemed tough at the time but paid back in spades during competition when my fights seemed easier than training.

One strategy (among many) was to alternate sparring partners every minute of the round while I boxed on for the entire three minutes. It was physically demanding facing a fresh fighter every minute compounded by mental frustration of having to adapt quickly to a new style to avoid physical punishment.

Whatever your pursuit, once you adapt to the skill over the distance don’t fall into the trap of peerlessness because I can promise you there is one out there and they’ll find you at the wrong time. Invent ways to trick yourself into making the workload more difficult, some runners wear heavier shoes in practice then strip down to the spikes for a race. If you don’t want to handicap yourself with weight then you’ll have to increase intensity, either against more or better opposition (like the boxing scenario) or improve measurements against the clock. Don’t let yourself off the hook.

Whether you have a coach or not, you can still prepare ethically by training overs in preparation for anything come event day. It doesn’t mean train thrice a day from now until the next road race, just have the common sense that if you train further than the distance and more intensely, then you’re on the right track. Don’t run 10km twice a week then attempt a marathon and don’t train like you’re Driving Miss Daisy then try to race like Aryton Senna. I knew one knucklehead whose marathon race plan was faster than his tempo runs. It defies belief.

So if you’re thinking of saying this to me:

“Hey Bowesy, thanks for the program. It looks awesome and super painful.”

Remember that awesome and painful go well together and the ethical reply is:

“When do you want to look like a goose? Now or later?

P.S. If you’re running the Gold Coast (or any) Marathon, the clock is ticking until the big day. I can deliver you a training program that will have you cherry ripe come race day. For our specific Training Programs page click here or click our Online Coaching page for full training mentorship.

If you know someone who needs an ethical preparation or ‘rev up’ at least, click to Tweet this article.