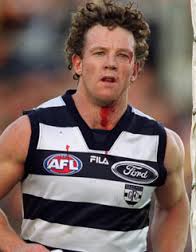 When I was growing up in the great decade of the 1990s, an unfortunate part of my existence was the perennially low ladder position of my football team, Collingwood. We got a premiership early, in 1990, celebrated for five years, then spent the remainder of the decade entrenched at the foot of the ladder. The top teams during the 90s were West Coast, North Melbourne and Adelaide, who claimed two premierships each, among a string of finals appearances. ‘Footy heads’ like me will argue ’til the cows come home about who really was the ‘Team of the 90s.’ But I always side with the West Coast Eagles.

Like any sports story, there’s always a hard luck case. The champion player who never tasted the ultimate success and his ‘coulda-been’ team who always seemed ‘so close yet so far.’ During the 1990s this team was Geelong. The classy Cats had some of the game’s biggest and brightest stars but never produced a whole team capable of claiming the big prize.  I was reminded recently about one champion from this team whom I’ve always loved and whose approach to performance we could do ourselves a favour by endorsing.

That player is Garry Hocking, known in the footy world as ‘Buddha.’ This week’s Open Mike interview with another former Geelong great, Billy Brownless, reiterated the qualities that underpinned Buddha’s greatness. Brownless reminded me of the rare qualities of his star colleague, saying “In those days, small guys were often tough and dumb or skilful and weak.” Buddha had it all, “He was tough, he was smart, and he could kick. He was a skilful player.” I thought if we could all be aware of these aspects in our own training and competition then we too might enjoy the benefits of such critical acclaim in the future.

This should be the first hallmark of any athlete. Firstly, you need to have the will to train and compete somewhere above your comfort zone. This is challenging enough, but digging deeper, I believe to be truly tough, is to be tough on yourself. To resist temptations of laziness and fulfil certain aspects of the program that you don’t really want to entertain, for example, recovery, stretching and gym work.

It’s common for athletes to hurt the way they want to hurt, and I’m as guilty as the next man. What you’ll realise after as many trials and errors as me, is you could’ve saved yourself time by just biting the bullet way back by doing the boring and tedious one percenters. Sometimes it’s the minor yet frustrating parts of the session or program that deliver the most benefit.

Furthermore on toughness in the contest and in training, you should realise that you have to put yourself on the line when it counts. Rarely will a late charge at something yield a successful result. A sustained and consistent effort will always beat someone who’s up-and-down like a honeymooner’s nighty.

Toughness is useless if the athlete lacks the brains to think for themselves, most often exacerbated in the face of injury or ill-health. Most times our ‘wannabe-perceived as’ toughness sabotages our smarts as an athlete. This is counter-productive and costly in both absolute and opportunity measures.

You should compete and train in an educated manner. Do this by understanding your possibilities but also your limits. Reading FIT CHAT is a good place to begin, because if you’ve read enough of these stories you’ll realise the coach has made more athletic blunders and bad calls than the bulk our Prime Minister’s political ‘attempts.’ I’m a guy to learn from.

I often tell athletes not work hard but smart. By studying your field of endeavour you can work out when to push and when to relax. My struggle in footy was to resist the urge to chase the ball around the park all day. Smarter players run to where the ball’s going not where it’s been.

Whatever you do in sports you need to maximise your level of skill. Everything is better when you can do it properly. With my extensive background in boxing I’d often hear people say that fighting on the street is different to boxing, like they had some secrets we didn’t know about. Not true. I’d always argue that everything they’ve thought of, we’ve thought of too, but with the added bonus of extensive skill in the sport. Sometimes I’d feel like demonstrating it to them, but I reckon Mum would yell at me.

Identify, practice and produce the skills required for your chosen sport and don’t tell me your sport doesn’t require any. If you think this, you just aren’t going hard enough. Many people have told me that running the marathon, or cycling, or Cross Fit, or Triathlon, are just volume sports and don’t require the touch of the popular spectator sports. None of these cats are in great shape, by the way, and nor would they come within a bull’s roar of competency in these sports.

Moreover, a high skill level provides efficiency in training and performance. In sports as simple and repetitive as the ones listed above it makes sense that if you’re repeating a ‘closed’ skill over-and-over then the benefit of having the skills to do it right would be exponentially greater. So stop telling yourself there’s nothing more to gain and get your form right. If you’ve got your form right, try going faster. Once you’ve got that sorted, work on your tactics. Then try it out in real life competition.

Implementing Buddha’s Athletic Trifecta will improve your performance and enjoyment of the process toward reaching that result. No one’s ever enjoyed hitting the wall halfway through something because they’ve overlooked the critical requirements for athletic performance that Buddha possessed in spades. Sure we all get the drift that you need to work hard and do it intelligently but it’s more fun to talk about footy players from the 1990s. With toughness, smarts and skill you’re fulfilling the core attributes of a solid performance in any pursuit. Whether your result is good, bad or indifferent, you’ll deserve it what you get.