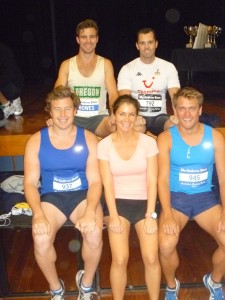 It was without doubt the biggest thing Canberra had seen in since Mal Meninga first raised the Winfield Cup in 1989. Eight of Sydney’s finest boarded the bus to run in the Australian Running Festival, which included the Canberra Marathon and Half Marathon events.

7 legends from the Eastern Suburbs took up the Half journey and completed the 21km course in style. Among them was, internet mogul and perennial PB runner Adam Franklin set yet another personal benchmark of 1:34.24. He was tailed by Bondi running’s meteoric riser Jack ‘Giant Killer’ Geddes who recorded 1:40.34 (and he didn’t really train, talent here). Sydney’s smartest human Caroline O’Brien was our first woman home in 1:56.33, followed by Clare Broad (running under the alias of James Brown after a registration bungle) in 1:59.58 and the ever consistent and persistent Charlotte Juhasz crossed in 2:01.36 completing her Half Marathon debut.

In the marathon we were represented by Neutral Bay’s finest endurance man and most colourful dresser, ‘Dashing’ Daniel Begley. ‘Begz’ who sprang from the mean streets of Stafford, Queensland during the 1990’s and forged his niche in sports that are too crazy for most people to even consider, stomped authoritatively all over parliament city to bag his 11th Marathon finish in 4:08.33.

It would be remiss of me not to mention our ‘bubble and squeak,’ one-man support crew of ‘Philthy’ Phil Pineo who provided informative stories and history lessons that helped to pass the time on the bus trip. One of our colonial brothers from ‘Jolly Old England,’ still shaking off the last effects of sea-sickness from the trip over, Phil was handing out supplements and jackets to our runners like Mother Teresa. Legend Phil.

Australia’s greatest road race, City2Surf is next on the agenda. Who’s coming to the big dance?