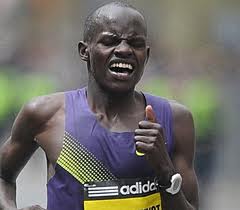 Great things can be achieved by people who have the confidence to back themselves. This week I read a story about Robert Kiprono Cheruiyot, a marathon runner out of Kenya’s Rift Valley (where else), Robert made his marathon debut at the 2008 Frankfurt Marathon in Germany. Since he had never raced the distance before, he had to purchase his own way and turn in a time under 2:14 to be reimbursed. Robert, shocked everyone including himself when he won the race in a record time of 2:07:21.

The definition of “backing yourself.”

We all know – Muhammad Ali, Babe Ruth, Anthony Mundine, Floyd Mayweather… athletes with brazen confidence who also have the ability to fulfill their promise.

This level of confidence, or apparent confidence, does not come because these guys decided they were going to ‘mouth off’ one day. It happens after a life time of dedicated, specific practice in their respective fields.

Muhammad Ali, made many big predictions about fights during his career and as stupid as it sounded at time, was it part of a deeper strategy?

Some say, to get inside the head of the opponent and have him beaten before he gets in the ring. My opinion is, it was the element of accountability, or goal setting, if you will. Once you announce something you are more likely to have a decent crack at getting it done. Put it on the line and force yourself to do the business.

The legendary Ron Barassi, perhaps the greatest footballer/coach in history, says “The greatest risk is to take no risk at all.” This is true. We should all adopt this mantra in our own areas of fitness and physical pursuits. Imagine if Robert Kiprono Cheruiyot hadn’t rolled the dice and paid for his ticket to Frankfurt that day. I should also mention that Robert went on to win the Boston Marathon in 2010 and ran 2nd in Frankfurt 2009. Fortune favours the brave and having the audacity to back yourself can be a beautiful thing.

Back in the 1980’s, Brisbane’s halcyon days when family men built ‘grass castles’ in the suburbs and mowed lawns on a Saturday whilst listening to Warren Boland’s commentry of the round’s Rugby League fixture between the Newtown Jets and the Illawarra Steelers on a transistor radio. Long before D.I.N.K., poindexters who spend more money on moisturiser than food decided it was trendy to build four-story mega-structure’s on a handkerchief-sized plot of dirt in Fortitude Valley, Newfarm or West End. These areas were home to Brisbane’s finest junkies, drug dealers, wine heads and prostitutes. One afternoon, two Brisbane boxers were on a training run through these very streets when one boxer stated – “Geez I hope we don’t get mugged” the other replied “If we get mugged we’ll make money.” The attitude of a man who has the confidence to back himself and after a lifetime of being a ‘hard man’ he definitely had the base to back it up.

I know a few athletes who are constantly ‘gonna’ do something, ‘coulda’ run that time, ‘woulda’ performed better if they had the time to prepare. The root of their failure, lack of real preparation. If you have an ordinary base, expect an ordinary result. The Egyptians didn’t build the pyramids with fibro and corrugated iron weighed down with house bricks.

Last week, one of my athletes who is trying to cram a 6 month marathon preparation into 6 weeks informed me of a calf muscle injury. “Silly boy, is all the I had to say.” He has set himself to run a goal time for the Gold Coast Marathon but his preparation is lacking and currently injured he’s paying the price.

I ask you, what goal are you lining up and backing yourself to achieve? Are you going to properly set yourself up to achieve it? With hard work, sacrifice and some bullish audacity. Anyone can back themselves but who can you back it up?