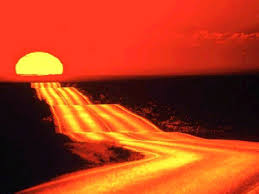 Hot, hilly and windy: This race had it all.

Some call it “the toughest challenge in sports,” others label it’s “the hardest thing they’ve ever attempted,” to race and finish a marathon is respectable in any language. I can report the successful bids of several Bowes Fitness charges in the recent Sunshine Coast Marathon. Words don’t do justice to the heroic efforts of but four men who braved the hot, hilly and windy Queensland asphalt on that day. Here’s some highlights as witnessed by a proud and honoured coach. 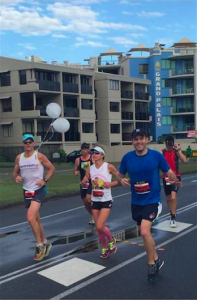 Our captain and leader, John gathered a group of likely lads who undertook an intensive three month training regimen culminating in the marathon finale. I was blown away by John’s commitment to his training and furthermore his willingness to share the training load by rallying troops around him for difficult sessions. It’s common for any of us to ask mates around for a beer, but rarely do we hit them up to come for a 20 mile long which is mutually advantageous. Learn from the great man here, do yourselves and your friends a favour and get them on the track with you. On a Sunday I’ve had hangovers and I’ve done long runs, and both have their place, however there’s no denying the benefits of a long run. And it’s cheaper too.

On course, John was a dynamo, sitting shoulder-to-shoulder with the 3:45 bunch during the first half of the race. Now, I think you know what’s coming next in the ‘ambitious race plan, inexperienced runner story.’ Yes Johnny faded in the latter half of the race, dropping off the pace and when I saw him just beyond the halfway mark with a face like Harvey Keitel at the end of Reservoir Dogs, I feared the worst.

I’ve been in this position before as well, I know when the reality of the broken dream sets in the mental challenge intensifies ten fold, maybe more. Weaker runners let this fear drive them into a state of ‘reckless abandon,’ a ‘Kamikaze’ style attitude where they throw their arms up and bury themselves in the agony, running ever harder but slowing exponentially.

Fortunately John is a smart man, a financial guru, a man of numbers, a beautiful mind, even in his state of pain and anguish his mental strength enabled him to minimise physical damage and time increase, thus finding the most efficient way home. Layer these smarts on John’s work ethic that would make a dairy farmer wince and you’ve got yourself an athlete, no wonder he prospers here.

Courage under fire, calm under pressure, anymore relaxed and he’d be brown bread. John settled over the final half of the course and crossed the finish line to the tune of 3:56:43. An achievement well under our initial goal time of 4:00 and with all things considered, just outside the 3:45 pace range. I have no doubt we can tame that beast next time around. 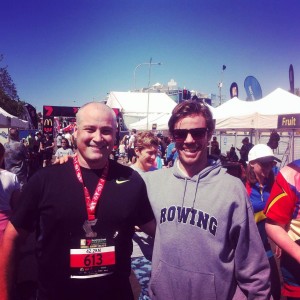 The great man, Guesty, whom I hadn’t met prior to race day but throughout our training regime we developed Johnny Lewis/Jeff Fenech style relationship. Now here’s the thing, for people who think they aren’t built, suited or able to run the classic distance of the marathon, on a running course Guesty is a Bull in a China Shop. But his incredible sense of personal responsibility, iron will and Pacman style attitude helped him achieve his pre-race goal to “finish and run it out.”

Throughout the program, Guesty encountered the common problems arising when you haul your body 20 miles around town on a Sunday morning. However he didn’t complain or whinge, his attitude was to ask for advice but take on the personal responsibility to heed the direction and solve the problem himself. Tom’s ability tend to problems immediately and his will to keep moving forward was the hallmark of his preparation. Tom’s blue-collar performance throughout the entire program should be written in a text book for other bandits who put out a press release every time they get the sniffles. You can lead the horse to water, you can’t make him drink.

On course, Tom displayed a text book marathon approach by choosing to start conservatively and just munching (Pacman style) through the inches, yards and miles all the way to the finish. Never in doubt, he ultimately got the prize.

When I saw him on course, the man was methodical, head down, focussed, one step at a time. At any level this is the perfect way to conquer this race. 5:26:39 later, Guesty came marauding into the finishing chute at the same tempo he’d set out in. And boy, I was loving it! 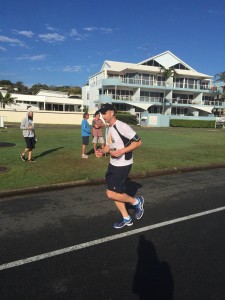 They told me this hard man of rowing stock was as tough as rocking horse droppings and his marathon performance certainly lived up to the billing. Youngie’s approach to the training program and race was disciplined and tough on all levels. With a wiry frame reminiscent of a young Thomas Hearns and heart like Phar Lap, Youngie is built for distance running.

I loved Ben’s commitment and “train at all costs” attitude during his preparation. On occasions Ben was out of town and would inform me of his situation, asking for ideas to train in his new surroundings. We can take two lessons from this, one, is there’s always time to train if your’e committed, and two, if you don’t know what to do, ask the coach. De Groot’s Chess Master theory stipulates my long term memory full of training content will be able to organise a training session applicable to your new surroundings. So hit me up.

On race day Youngie flew though the first half like a young Steve Moneghetti. What our perceptions didn’t tell us at the time was that while Ben was looking the goods his body was suffering the initial stages of dehydration and heat stroke. Youngie’s heart could only keep him going so long before an unsavoury collapse and early exit. He ran bravely for miles before an asphalt face plant, a ride in the ambulance and night in the quaint Nambour Hospital.

Lack of preparation or the searing sun were bandied around as likely causes of his misadventure but I believe this fall from grace is mostly bad luck. Youngie’s bad luck is tinged with great intervention in having the right people on the scene to treat troubled runners before they end up on the wrong side of the dirt. Another positive, Youngie was the highest money raiser for charity out of all competitors across the entire weekend’s racing. Congrats Youngie, you’re a true warrior and the People’s Champ. 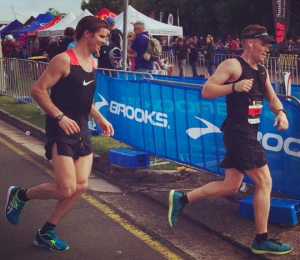 The great red man. This man’s love for pain is matched only by his love for red hair and other purveyors of the Fantapants do. Urbo’s as hard as a cat’s head and carries a ‘no non-sense’ attitude in keeping with his perennial ‘short back and sides’ cut.

I love Urbo. He’s been a great mate for a long time and it’s not widely known that Ben was the first person I ever coached back when I was young buck and my brother used to ‘ask’ me to coach the pair in boxing. Ben gave me a black eye once too.

We know the marathon is a long journey, not for the feint of heart nor weak of bowel. On course Urbo displayed a Bill Lawry-like  patience not commonly belying a man of such auburn tinge. Memories of his mid-race collapse at Gold Coast a couple of years ago served a harsh reminder of how brutal an ordeal this can be.

His race plan, “run with the 3:30 pacer until 32km and then have a crack if there’s anything left in the tank,” was straight from a Rob De Castella text book. The Red Man was vigilant for the first 20 miles, not giving that pacer an inch to the front nor side. All the way conserving his energy like a senior citizen hangs onto a ‘2 for 1’ meal voucher for early dinner at the Gaythorne R.S.L.

At 32km when the 3:30 pacer inexplicably stopped running the great man was nonplussed and continued by “running on feel,” and letting his body guide him the remainder of the journey. His pace increased slightly but remained cautious enough should the road get rough up ahead.

And they did. It always does.

But the beauty of Urbo’s race was, by the time his breathing deepened and feet pounded harder he was close enough to the finish to renowned Ox-like heart to get to the line. His last half hour on course was hellish bordering on inhumane but Urbo stuck fat and found the line faster than Darius Boyd, finishing in 3:28:45.

In my view, the perfect race takes courage: to put yourself out there in the firing line, patience: to resist temptation early, commitment: to maintain through the middle third, and heart: to finish in those late stages when you’ve all but had enough. Urbo personified my vision. 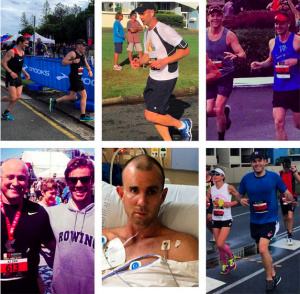 We learnt many lessons on the harsh roads of the Sunshine Coast that sunny Sunday and I hope you’ve learnt from reading here about ways to ‘get it done’ in training, racing and coaching. Johnny Corry assembling numbers to spread the training load, Guesty solving problems and ever progressing, Youngie never missing an opportunity to train and when he was short on ideas asking the coach (what I’m here for) and Urbo, for learning from his previous foray and building patience into his fiery red racing repertoire.

It’s humbling and emotional to recall the boys’ epic deeds displayed that day. I believe teaching something to someone is greatest gift in life and I’m grateful for my students for providing me this opportunity. I’m proud to pass the beautiful gift of the marathon to these men and feel privileged to have shared this great day with them.

“If you’re lucky enough to do well, it’s your responsibility to send the elevator back down.”

Do you have ambitions of racing a marathon event. To get quality coaching and inspirational chat from me click this link to run your Personal Record on the Sean Bowes Marathon Program.

Help inspire your band of followers by clicking here to Tweet this story.